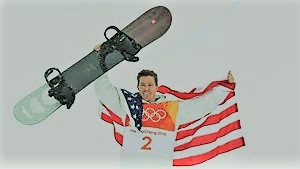 After failing to podium in the 2014 Sochi Winter Olympic Games four years ago, half pipe snowboarder Shaun White redeemed himself and took home the gold to finish off his legendary career.

The victory also marked the USA’s 100th Winter Olympics gold medal, which is a fitting accomplish for White to take home.

White scored a record-breaking run with a 97.75 on the final run of the night. On his first run, Shaun laid down a brilliant run that propelled him well into the lead. However, Japanese rider Ayumu Hirano took the lead in his second run by scoring a 95.25. After failing to regain the lead on his second run, White was left with one final run to top off his massively successful career. As the highest qualifier, he took the final run of the night and did not disappoint, landing a smooth run that featured many huge hits and perfectly performed tricks. Hirano finished with silver and Australia’s Scotty James finished with a 92 point score, taking home the bronze.

White, who was one of the pioneers for the sport and helped it grow tremendously, had previously won gold in the event in 2006 and 2010.

White told Sports 360, “Oh man, that was awful and amazing at the same time. I knew I did a great ride and I was proud of that and I could walk away with my head high, but when they announced my score and I’d won, it crippled me.”

In October of 2017 during a half pipe training run in New Zealand, White took a massive fall in which he smashed his face off the top of the half pipe. White’s crash required 62 stiches and put him in a place of doubt if he could do this anymore.

He told ABC News, “It was a pretty rough thing to go through, and such a bummer because I was having the best day. I was crushing practice, things were great, and just one kind of little mess up, and — boom! — I’m being helicoptered to the hospital. “It was the most visually jarring injury…I’ve had a broken bone, but it’s not like you visually see the snapped bone. This was like … you can’t avoid it … I’m looking in the mirror like, ‘I don’t even recognize this person.'”

His injury left his face scarred in multiple places.

However, at a Dew Tour qualifier in January, White was able to land a perfect 100 in his run to win. This event is what allowed him to compete in the Olympics, literally and mentally. It gave him the confidence to give it one more shot, as well as a birth to represent the USA.

As for “The flying tomato” (White’s nickname due to his high-flying style and red hair), it is unclear if he will retire after his latest accomplishment. At 31 years old, it is almost certain that he will not compete in 2022 Winter Olympics and will most likely pass the half pipe dominance down to a new rider.