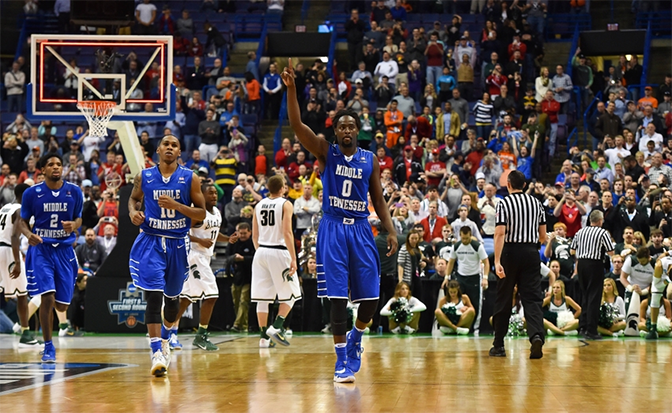 The bracket for the 2017 NCAA Division I Men’s Basketball Tournament has been unveiled, and America could not be more abuzz.

As the tournament winds down near the end of March and the beginning of April, it is highly likely that a one or two-seeded team will be cutting down the nets as the national champion at University of Phoenix Stadium in Glendale, Arizona.

However, everybody knows that unforeseen upsets will occur and Cinderella stories have the potential to make magical runs.

Here is a look at some of the upsets that are nearly inevitable:

(East Region) The #12-seeded North Carolina-Wilmington Seahawks will take down the #5-seeded Virginia Cavaliers in Orlando, Florida. UNC-Wilmington has lost just five games all season, with just one of those coming on home court, while Virginia has lost five of its last ten games entering the tournament. CBS Sports notes that while the Cavaliers play some of Division I’s stingiest defense, the Seahawks are tenth in the nation in points per game average, so expect an upset out of UNCW.

(East Region) The #13-seeded East Tennessee State Buccaneers will defeat the #4-seeded Florida Gators in Orlando, Florida. ETSU has lost just twice since the beginning of February, and two of their seven losses came on the road against other NCAA Tournament teams. Florida, on the other hand, enters the NCAA Tournament losing back-to-back games against the conference-rival Vanderbilt Commodores and without their big-man, John Egbunu, who was lost to a season-ending injury. Do not be surprised to see a 12 versus 13 matchup in the Round of 32 in Orlando.

(West Region) In a minor upset, the #9-seeded Vanderbilt Commodores will knock off the #8 Northwestern Wildcats in Salt Lake City, Utah. While Vanderbilt enters the tournament with 15 losses (the most ever for an at-large team), they played to the tune of the toughest schedule in Division I, and they have an elite and experienced scorer in Matthew Fisher-Davis. On the other hand, the young bunch of Wildcats have little postseason experience and are appearing in the NCAA Tournament for the first time in the school’s history, so Vanderbilt will take this contest.

(Midwest Region) The high-flying #11-seeded Rhode Island Rams will defeat the #6-seeded Creighton Bluejays in Sacramento, California. While the Rams were not a lock to get an at-large bid, they ran the table in the Atlantic 10 Tournament to earn the automatic bid, and they are equipped with all-around talent in E.C. Matthews and Hassan Martin. On the other hand, Creighton is dealing with Maurice Watson Jr., who is battling both an injury and a sexual assault charge. The distractions will overwhelm Creighton as the Rams sore over the Bluejays.

(South Region) The #12-seeded Middle Tennessee Blue Raiders will rout the #5-seeded Minnesota Golden Gophers in Milwaukee, Wisconsin. Middle Tennessee has lost just four contests all year and are nationally known for their upset of the #2-seeded Michigan State Spartans in last year’s tournament. Led by Giddy Potts and Reggie Upshaw, the Blue Raiders are ready to take down a Gophers team who is appearing in their first NCAA Tournament since 2013.

Gear up, because it is March, and March is the time where magic is made.