Why the Pirates will not makes the playoffs 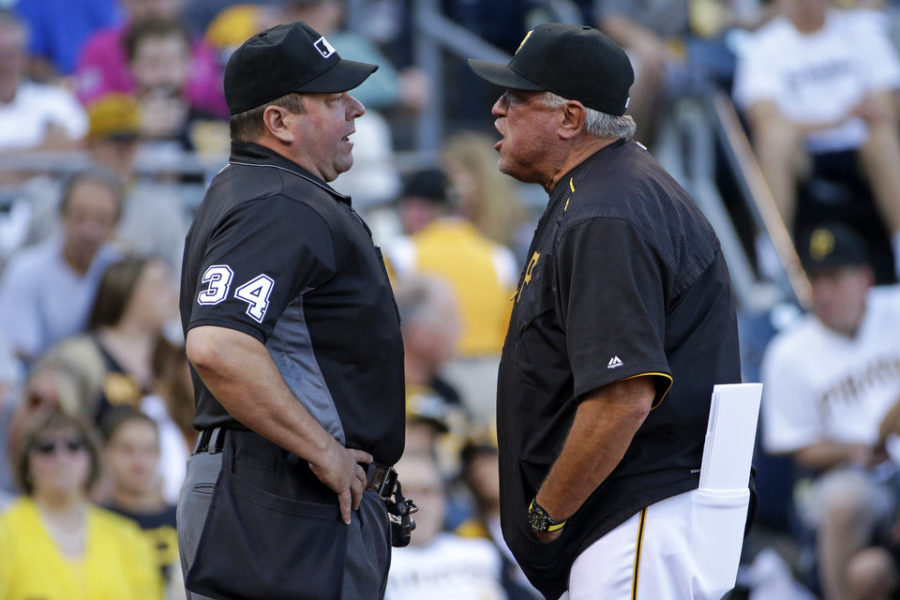 Pittsburgh Pirates manager Clint Hurdle, right, speaks his mind to umpire Sam Holbrook after being ejected during the first inning of a baseball game against the Milwaukee Brewers in Pittsburgh, Wednesday, July 20, 2016. (AP Photo/Gene J. Puskar)

For the past three seasons, the Pittsburgh Pirates have made it to the National League Wild Card game. The big question is: Will they be able to do it for the fourth consecutive season? That’s a great question. Let’s just say the odds are not in the Pirates’ favor right now.

The Pirates’ current record is 69-69. They sit four games back of the New York Mets for the second wild card spot. They need to pass the St. Louis Cardinals, who are a half game back of the Mets, first and foremost. St. Louis has a 73-66 record, while New York is 74-66.

The Pirates’ season has been a disappointment. Fans are not happy. There are many reasons why Baseball Prospectus, a popular baseball analysis organization, says that the Pirates have less than a five percent chance of making it into the playoffs.

Also, Cutch is hitting a career low, .250, and he is on pace to strikeout the most that he ever has in a season. Some people think it’s the hair. Maybe he should grow the dreads back.

The overall management is one of the biggest problems the Pirates’ team has. The front office is not motivated to win games. If they actually took the team seriously and made an effort to acquire players to fill weak spots, the Pirates would easily be in the playoff hunt.

Fans are frustrated because they know that the Pirates have the money and farm system to sign or trade for players that will help them win. According to CNBC, Bob Nutting is the tenth richest MLB owner in the entire league. The Pirates can win now, but they continue to play with what they have and hope for the best.

USA Today ranks the Pirates 17 out of the 30 MLB teams, right behind the Seattle Mariners, in the team power rankings.

One of the worst decisions made by the front office this year was to trade the “Pittsburgh Kid”, Neil Walker, to the New York Mets in exchange for left-handed pitcher, Jon Niese. This trade turned out to be a disaster.

Niese started 18 games for the Pirates. He went 8-6 with a 4.91 ERA. Eventually, he was moved to the bullpen because of his struggles. At the trade deadline, he was traded back to the Mets.

Neil Huntington, the General Manager of the Pirates, joined 93.7 The Fan, a Pittsburgh sports radio station, and admitted that the Walker-Niese trade was a mistake, “In hindsight, maybe the two fringe prospects and trying to figure out where to reallocate the money (that Niese is getting) might have been a better return.”

Neil Walker hit 23 home runs this season, and his batting average is .282. He has already tied his career high home run total. Sadly, he had season-ending back surgery, but he was on pace to have one of the best seasons of his nine year MLB career.

According to Bucsdugout.com, Niese’s WAR with the Pirates was -.4, while Walker’s wins above replacement sits at 1.1. As you can see, Walker’s departure impacted the team considerably.

While I can sit here and give you at least ten other reasons for the Pirates’ struggles this season, these are just a few that I’d like to point out. There will be no miracles this year. The New York Mets, with one of the “easiest” schedules in the league from here on out, and the San Francisco Giants will be battling it out in the NL wild card game on October 5.