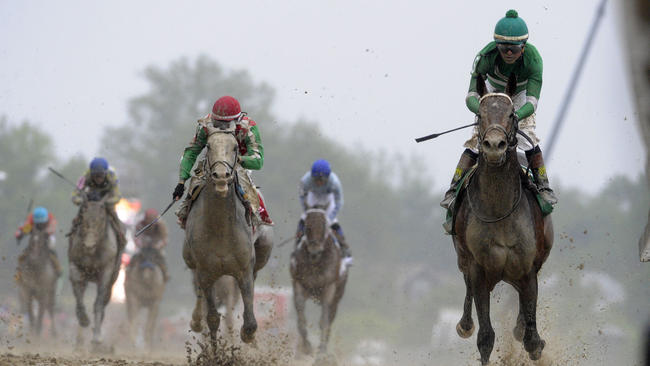 Horse-racing as a whole lost its chance to have two consecutive Triple-Crown winning horses in 2015 and 2016 after Nyquist lost at the Preakness Stakes this weekend. Nyquist came in third place in the event that was won by Exaggerator in just over one minute and fifty-eight seconds.

Cherry Wine finished the Preakness in 2nd place, lagging behind Exaggerator by about 3.5 lengths. Nyquist finished in third after running towards the front of the pack for most of the race before Exaggerator came from behind to steal the victory. Both Nyquist and Exagerrator had subjectively low odds after their strong finishes in all of this year’s races leading up to the Preakness.

Nyquist’s early lead failed to materialize into a victory, perhaps due to the belief that the conditions that faced Nyquist hindered his chances of winning. Many pundits agreed that the track’s length of 1-1/16 miles better fit opposing horses’ racing styles than it did Nyquist’s.

Damp, muddy conditions also plagued  Baltimore’s Pimlico Race Track, and Nyquist had never run in such poor conditions before in his career. The track’s sodden qualities unfortunately saw one horse euthanized after breaking its leg in an undercard race. Another horse sadly died after collapsing following an undercard victory.

American Pharoah was able to accomplish the illustrious Triple-Crown feat in 2015, and he was the last horse since Affirmed (who won it in 1978) to do so, according to Horse Racing Nation. Only twelve horses have ever won all three races, and 23 horses have won the first two only to lose (or sometimes not even run in) the third.

This year’s Belmont Stakes, while unable to title any given horse as Triple-Crown winner, is still sure to be a tight, competitive affair. Both Nyquist and Exaggerator are set to run on June 11th at Belmont Park (a track that is slightly bigger than Pimlico, perhaps altering the horses’ running strategies), furthering their newfound rivalry. The presumed final matchup between the two favorites will see Nyquist attempt to avenge his Preakness defeat and end his racing season on a high note.