Leicester City F.C. are shockingly top of the table 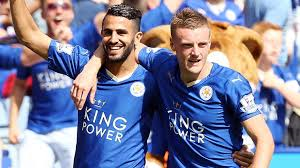 After narrowly escaping relegation at the end of last season, the Leicester City English football team as proved its doubters wrong and taken up first position in the world renowned Barclays Premier League.

Manager Claudio Ranieri’s squad, that he inherited from former manager Nigel Pearson only a few months ago in July, has usurped any expectations that could have possibly been applied to the small club from the East Midlands area of England. Solid performances from all of the teams stars and supporting players have left the club in a great position moving forward, sitting on top of the league with 32 points as of December 11th. Heading into week 16 of the 38 game long season, they are 2 points above second place Arsenal after going undefeated in their last 8 matches.

These sudden winning tendencies are due in part to Leicester’s maverick striker Jamie Vardy. A colorful yet polarizing personality, Vardy is also a goal-scoring attacker in a sport that he had been playing unprofessionally only 4 years ago, according to The Guardian. His brutally honest demeanor and off-field loyalty to his team, along with his mind for goal scoring, have solidified his position as one of the star players of the current BPL campaign. Vardy recently broke the record for most consecutive Premier League games played with a goal scored, having found the net a whopping 11 games in a row.

But Leicester City has also had other players settling into their respective roles quite well. Algerian winger Riyad Mahrez has been the Foxes’ secondary attacking threat, a duty that he has excelled at. His 11 goals in 16 games played this year, including cup ties, have given the rest of Leicester City’s players an alternate scoring threat to play off of along with Vardy. He also leads the team in assists, as Mahrez has tallied up 6 total this Barclays Premier League season.

Leicester’s defensive and goalkeeping play has also been noteworthy this year. The solid back line has been led by goalkeeper Kasper Schmeichel, son of Manchester United’s former goalie Peter, one of the Premier League’s greatest players in its history. But Kasper has been making a name for himself in recent years, serving as LC’s keeper since 2011 according to Leicester City’s official website. His 39 league saves this season, over the course of 15 games, have cemented the squad’s success this domestic season.

All of Leicester City’s individually strong performances have left the team in first place in the top English football league, over such powerhouses as Manchester United, Manchester City, and the aforementioned Arsenal. Leicester are even a whopping 17 league points above their next opponent (and the current title holders) Chelsea F.C., as of December 11th.