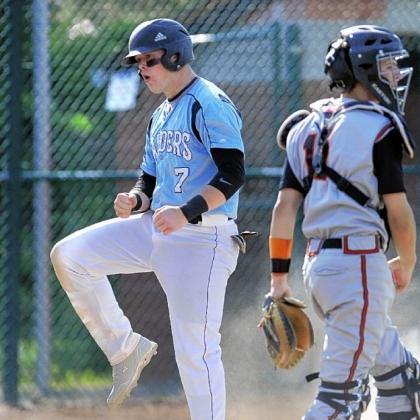 After two losses to begin the season, the varsity baseball team was in unfamiliar territory.

Despite the early season struggles, the team got it together and haven’t looked back since.

After 16 straight wins, the Raiders find themselves back in familiar territory over the last few seasons: a top seed in the WPIAL playoffs.

The Raiders entered the playoffs as one of the four number one seeds in the WPIAL, joining AAA South Park, AA Quaker Valley, and A Serra.

The Raiders earned a first round bye in the playoffs before facing the Bethel Park Black Hawks Wednesday night at Shaler.

On the bump for the Raiders was junior Connor Coward, who tossed a one hit gem while striking out seven and walking one in his best game of the year, according to him.

Senior Brad Gresock said “It all starts with pitching. Connor threw a great game with good command of all his pitches. [The defense] made all the plays behind him and we all fed into each others good play. Hopefully we can transfer that into scoring more runs next game, but we got enough to win and advance.”

The Raider offense didn’t hang any crooked number they like have become accustomed too this season, but they gave Coward all the run support he would need on this day.

In the third inning with two outs, Gresock reached base after being a hit by a pitch, and fellow senior Carson Kessler singled to right field and advanced to second base on an errant throw.

Junior Gianpaul Gonzalez delivered the key hit that knocked in both Raider runs and ultimately propelled them to their 16th straight victory and a date with the Pine Richland Rams in the WPIAL semi-finals.

The semi-final game will be played Tuesday May 21, at 7 pm at Pullman Park in Butler.