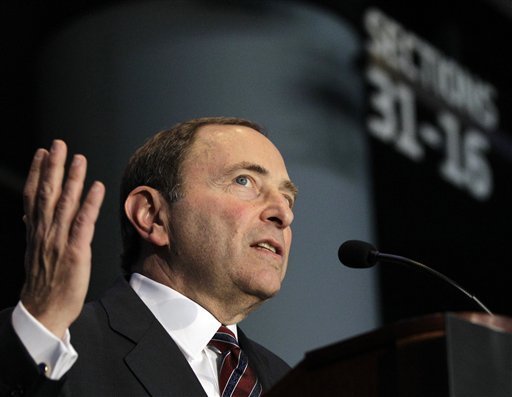 The opportunity for a full 82 game NHL season was lost on Thursday after no agreement was met between the players and the NHL.  It still seems that both sides aren’t very close in negotiations, and now it seems that the season itself could be in serious jeopardy.

There were little to no negotiations on the last day of the deadline, and when commissioner Bettman was asked if there was any shot of a full season, he said “it is not going to be a reality.”  This deadline passing closes the proverbial door on a full NHL Season, but for now there is still some time to salvage part of the season.

The NHL can take the route the NBA took last year and start late and have a shortened season.  It would be around 60 games, but everything would go as it would in a regular length season.  There doesn’t seem to be an actual deadline for when the league will cancel the entire season, but most people are looking towards the All-Star Game and The Winter Classic as a benchmark for when the year will be lost.  Those two nationally televised events are the two biggest money makers for the NHL throughout the year.  If the NHL decides to cancel them, it is almost a guarantee that the season will be lost.

The offer the NHL proposed last week, which included a 50/50 split in revenues, seemed like it would open the floodgates to a possible deal soon after.  On the surface, this offer seemed a very reasonable one, and it would be selfish for the players to not accept it.  The players did not accept the offer, as in the fine print there were a lot of things that would hurt the PA and would be a terrible deal to accept (contracts no longer than 5 years, etc.).  The public saw this offer from the league as a step in the right direction, but really it was a simple PR move made by the owners to get the fans on their side.

The whole lockout thus far seems to be an attempt by both sides to have support from the fans, the players have most of the fans loyalty, but the owners took some after their proposed “50/50 split”.  The problem with this is that very little negotiating has gone on and the two sides don’t seem to be any closer to a season than they did on day 1.

If the two sides don’t swallow their pride and actually start negotiating a deal that can work for each other, then it is simply inevitable that there won’t be an NHL season this year.  That is something that Fans around the country don’t want to see, and hopefully the players and owners have that same sentiment towards it.

Gary Bettman seems to be putting all of the pressure on the players by simply stating, “You can’t dance by yourself.”