Raiders put an Exclamation Point on 2012 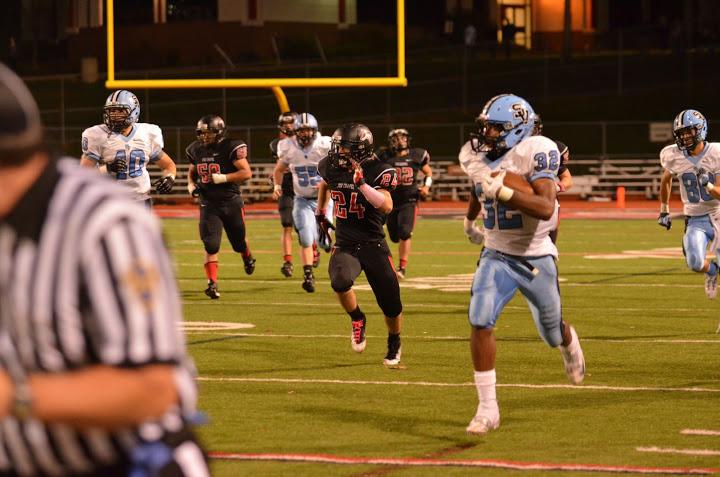 Forrest Barnes runs for a touchdown against Fox Chapel. Barnes had a total of 238 yards and 4 touchdowns vs the Foxes.

The Seneca Valley Raiders varsity football team put an exclamation point on their 2012 regular season with a blowout 54 to 19 win over section rival Fox Chapel Foxes.

From the opening kickoff to the final knee, the Raiders were in control of this game.

The offense put up its second 50+ point effort of the year Friday night in large part due to senior halfback Forrest Barnes, who had a record breaking night.

The Raider running back racked up the sixth most yards in the WPIAL Friday night against the Foxes defense with a total of 238 and also scored four touchdowns (7, 4, 43, 92 yards), all in the first half.

The 238 yard performance put him over the century mark for the eighth time in nine games this year, and his second 200+ yard effort.  Barnes finished the regular season with a Raiders’ single season record of 1,393 yards, breaking the decade old record left by Bill Davis.

Barnes said “The Offensive line has been great, they lead the for me and make every score and yard I have possible. It feels like I turned another page in a chapter of my life.”

Senior quarterback Jordan Brown kept his steady play going against the Foxes defense as he threw for 105 yards and connected with senior wide receivers Ryan Conn and Jonathan Dorogy for touchdowns of 13 and 23 yards respectively.

After a first quarter in which the Raiders found themselves up by a score of 12-0, the offense flexed its muscle as they scored 28 points in the second quarter alone.

The other seven points came when Fox Chapel’s quarterback was hit by senior defensive end Nick Dahlstrom right as he was throwing and junior nose tackle Stephen Gaviglia intercepted the pass and took it thirty yards for a touchdown, and sophomore Chad Izenas knocked through one of his six extra point conversions.

Fox Chapel added a touchdown on a 64 yard run, but the game was already out of reach with a score at the half of 47-6 in favor of the Raiders.

In the second half, junior quarterback Mike Jones found sophomore wide receiver TJ Holl on a 52 yard pass that went for the final touchdown of the game for the Raiders.

Jones finished the game completing 4 of his 6 passes for 113 yards and the touchdown.

The Raiders will look towards the playoffs and their first round match up  which will be announced Monday night.  Potential opponents could include Peters Township (5-4, 4-4) of the Southeastern conference or Hempfield (4-5, 4-4) from the Foothills conference.