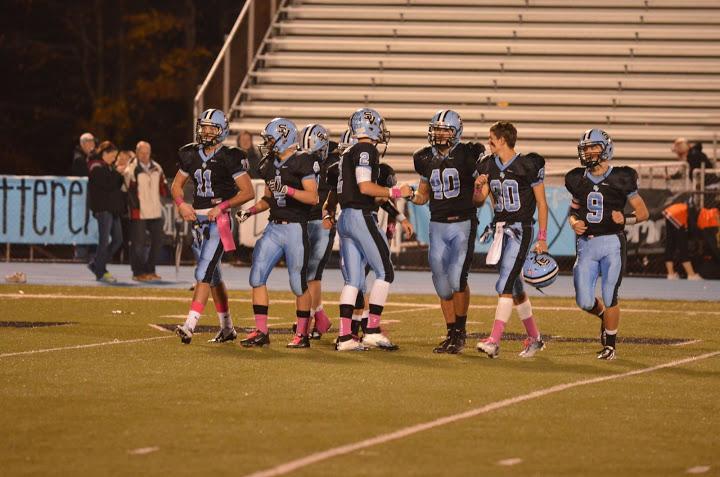 The Seneca Valley Raiders varsity football team secured a big win Friday night in Nextier Stadium during the final home regular season game of the year by defeating the Bethel Park Black Haws by a score of 35-14.

The game started off well for the Raiders as their offense was in high gear coming right out of the gates.

The Raider offense scored on its first two possessions of the game, coming on two and eight yard runs respectively by Seneca Valley’s senior running back Forrest Barnes.

With the two extra points kicked by sophomore kicker Chad Izenas, the Raiders found themselves up by two scores early in the game.

After its first two possessions, the offense stalled out a bit as it took them until the final quarter of play to find the end zone once again.

In that final quarter the offense revved its engine and put up three more scores. The first score came on a three yard pass from sophomore wide receiver TJ Holl to senior tight end Ryan McCauley.

Barnes (32 yard) and sophomore running back Mason Dehart (1 yard) also found the end zone in the fourth quarter to help secure a big non-conference victory for the Raiders.

Barnes racked up 179 yards on the ground on 27 carries as he and the veteran Raider offensive line of continue their dominance in the battle in the trenches.

Senior quarter back Jordan Brown continued to play well as he finished the game competing 15 of his 21 pass attempts for 161 yards, 87 of which went to senior wide out Paul Hudanick who came up big for the home team all night.

Despite looking shaky at times throughout the game, the Raider defense came up big when it needed to.

After Bethel Park scored on the opening drive of the second half tying the game at 14, and then forced a quick three and out by the Raider offense, the momentum appeared to be sliding to their favor.

However, on the ensuing punt, senior Hunter Long came up with the big play the Raiders needed as he recovered the muffed punt which put the Raider offense right back on the field, which led to Holl’s touchdown pass.

On the very next series, the Bethel Park offense was driving and again the defense came up with another big play as they recovered yet another fumble, this one led to Barnes’s third and final touchdown of the game.

The defense also came up with a huge stop by junior defensive end Stephen Gaviglia on fourth down and one yard to go, which secured a win for the Raiders.

Senior free safety and team captian Ben Hodges said “The defense stepped up when needed most in the game Friday night. The timely takeaways and a huge stop not only kept the momentum on our side, but kept their defense on the field. With our fast passed offense, it wore them down and we were able to get a few scores in the second half. Ultimately, we know that if we can keep the opposing team from scoring, we have confidence we will win the game. So we take it upon ourselves to play 48 minutes of lights out defense.”

The Raiders will conclude their regular season with an away game against the struggling Fox Chapel Foxes.