Raiders Prevail in Battle with Indians 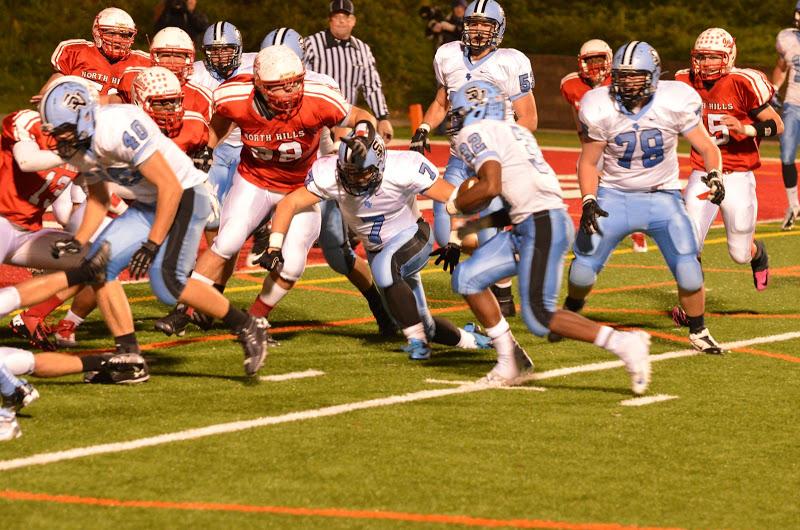 It was a battle of the Raiders vs. Indians Friday night under the lights in Martorelli Stadium with the Raiders coming out on top by a final score of 40-26.

It was a back and forth scoring battle for much of the game with a score at the half of 26-19 in favor of the Raiders.

The Raider offense continued its dominance by putting up its fourth straight 30+ point effort.

Senior halfback Forrest Barnes continued to roll, putting up 156 yards on 29 carries and scoring three touchdowns as he and the Raiders’ offensive line dominated the battle in the trenches.

Senior guard Nick Dahlstrom said about the performance “We feel pretty good about the way we played Friday, but I think as a whole we could be better, and we have to be better against a big Bethel Park team. We need to move faster and dominate the line of scrimmage by running the ball between the tackles.”

Brown completed 11 of his 18 pass attempts for 205 yards and two scores, and also continued to make plays on the ground collecting 58 rushing yards.

Brown’s two touchdowns went to senor tight end Ryan McCauley and sophomore wide receiver TJ Holl, who pulled in a 7 yard touchdown with just 35 seconds left before half time to put the Raiders on top again.

After a shaky first half in which the Raider defense surrendered 19 points, they again ramped it up coming out of the locker room for the second half.

In the final 24 minutes of play, the Raider defense gave up only 54 total yards to the Indian offense and recovered two key fumbles, both of which were caused by Holl.

With the Indians threatening, down one score, and with the ball on the Raiders 7 yard line,  defensive end Dahlstrom came up with the big play the Raider defense needed as he returned a Holl-induced fumble into Indian territory.

Holl said “I think the defense made a huge impact on the game. We only gave up a touchdown in the second half and made a lot of plays to help our team win.”

Despite a 90 yard kickoff return for a touchdown by Jordan Blackmon and a 78 yard fumble recovery for a touchdown, the Indians could not get out of their own way as they committed 12 penalties for 93 yards.

With the win, the Raiders clinched the number two position in the tough Northern 8 section and a home playoff game, the second in school history.

The Raiders will continue to jockey for playoff positioning as the Black Hawks of Bethel Park come into Nextier Stadium after an astonishing upset win over previously undefeated and #2 team in the WPIAL Upper St. Clair.

The game is the final home regular season game of the year and is also senior recognition night.