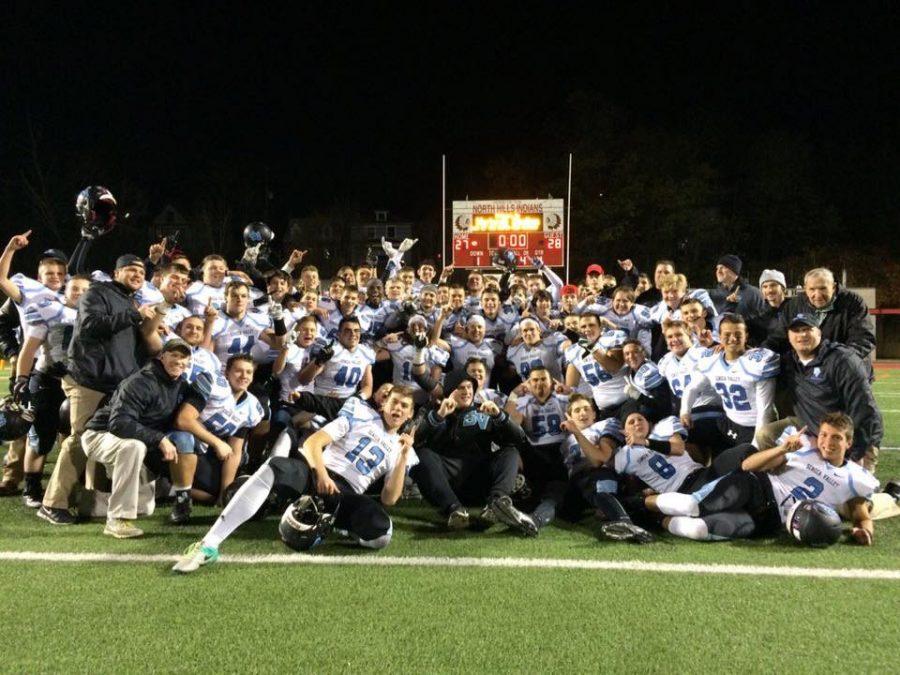 On Friday, November 18 the Seneca Valley raiders football team will lay it all on the line for a shot at a WPIAL championship against Central Catholic.

The Raiders obtained their opportunity for a championship the previous week after a thrilling 28-27 win against their bitter rivals North Allegheny in the semi-final match-up.

Junior Gabe Miller, number 40 for the Raiders, blocked an extra point attempt by NA to secure a spot for SV in the championship. A monsoon of fans stormed the field following the block and cheered as they knew the Raiders had just upset a heavily favored NA team.

The Raiders now have bigger thoughts on their mind following the intense semi-finals victory; thoughts of bringing the school a WPIAL title.

The Raiders hope to pull off an upset against the juggernaut Central Catholic team. Hank Royal, the starting running back for the Raiders, is having his best season yet and he is only a junior. Royal ranks second in the 6A section in total yards accumulated with 1,714 yards. In addition to that, Royal is averaging a whopping 155.8 yards per game. As Royal continues to rack up yardage on the offensive side of the ball, Miller is expected to carry the weight on the defensive side.

The Raiders posted a 8-3 record with many close victories, and several players have come through in clutch moments to get them to this point.

The main strength of the Raiders is their running game. If the Raiders can establish a running presence early, they will have a good shot at victory. The glaring weakness is the defensive pass rush. If the Raiders are not able to successfully sack the opposing quarterback, or at the very least apply pressure, then the Raiders will have a tough time winning.

On the other hand, the Central Catholic Vikings cruised into the championship by obliterating the Pine Richland Rams 63-34.

The Vikings posted an impressive 11-1 record, with the only loss coming the first week against St. John’s. The Vikings have put up 40 or more points in every game this season except for the week one loss at St. John’s.

The strength of the Vikings is certainly their offense. If the Vikings post their usual numbers, they will have no issue obtaining victory. However, the Vikings are overly-confident as a team and that may lead to underestimating their opponent.

Central Catholic is a two-dimensional team with nothing to prove since their record speaks for itself. Seneca Valley is the clear underdog in this match-up, but their determination is not to be overshadowed.

The championship is scheduled for 8:00 PM at Heinz Field in Pittsburgh. All tickets at the gate will be 10 dollars.  The game will also be aired on ROOT sports on a delayed schedule due to the penguins game.

The stage is set for a thrilling match-up. All fans from around the area are encouraged to attend this dramatic showdown.