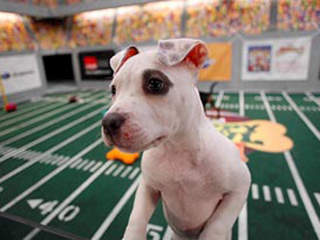 Who needed the Ravens or the 49ers when there were sixty-eight adorable, and better yet, rescued puppies ready to paw their way into the winner’s circle during Animal Planet’s ninth annual Puppy Bowl.

Aside from the stars of the football game, including 11 week old Magnolia, 9 week old Pearl, and 11 week old Sally, the hedgehog cheerleaders also owned the field when they pumped up the crowd with their pom-pons. With Meep the bird tweeting live during the entire game, literally, and pilot hamsters surveying the field from their “blimp”, who could possibly turn the station?

, “A record 12.4 million viewers tuned into the 12-hour marathon, according to official stats released by Discovery.” Although the adorableness proved to be a great selling point in order to gain viewers, the blackout at the Mercedes-Benz SuperDome during Super Bowl XLVII may have been a big help for the Puppy Bowl fan-base.

The Puppy Bowl first aired from 3-5 p.m. EST, but the prime viewer ratings occurred  in the evening when half the lights went out in the third quarter of the Super Bowl for 34 minutes.

Viewership hit an all time high at 1.1 million viewers from 8:51-9 p.m. EST, reaching a 54-percent increase in comparison to the prior Puppy Bowl IX segment.

The premiere managed to boost Animal Planet’s rank to No. 1 in the time slot of 3-5 p.m. among all cable channels, and No. 2 in all of television, trailing behind CBS, the channel which was broadcasting Super Bowl XLVII. AnimalPlanet.com brought in 27 percent more visitors versus last year, and the animal-based site even generated over 1.6 million video streams.

Aside from all of the ‘excessive cuteness’, it was quite a bonus for viewers to find out that all of the animals featured in Puppy Bowl IX were supplied by PetFinder.com rescue groups and shelters. It is now officially reported that they have all been adopted.

The night ended with a Schnauzer/Beagle mix named Marta being crowned Puppy Bowl IX MVP. Her small stature failed to hinder her game, and she ran away with the overall title of the night.