SVHA gears up for PIHL Playoffs 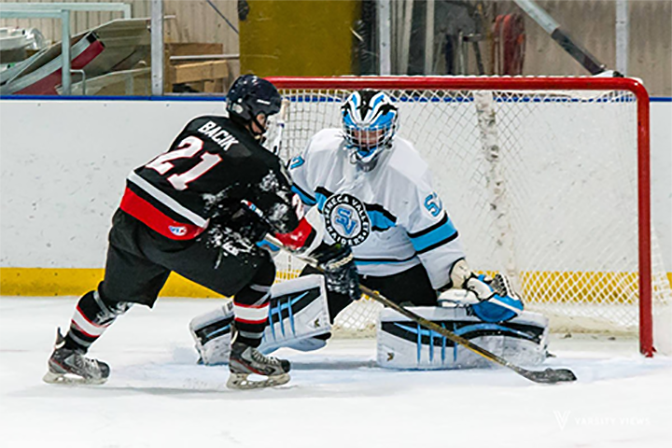 It is finally March, and that means many things, but one of those things is that it is time for playoff hockey.

Seneca Valley’s ice hockey teams will yet again get ready to compete in the Pennsylvania Interscholastic Hockey League playoffs.

Year in and year out, the Raiders are always fielding its middle school, junior varsity, and varsity teams in the playoffs, and this year’s theme is no different.

While the majority of the team’s fates are currently unknown until the near beginning of March, the varsity team is aware of the tasks in front of them.

The Raiders’ varsity group, who closed out the regular season with 10-8-2, will face an arduous task.

They will play as the five seed in the Class AAA Penguins Cup Playoffs, and will have to travel to Erie for the first round. They will play four-seeded Cathedral Prep, and a potential quarterfinal win would move the bunch to Neville Island to play the winner of Central Catholic and Butler. From there, a semifinal victory would advance them to play in the championship game at UPMC Lemieux Sports Complex in Cranberry Township.

While the opportunity certainly exists, it will be a monumental task for the middle of the pack Raiders to overcome three squads en route to a title at the varsity level.

However, Seneca fields four other teams at the junior varsity and middle school levels that are in very suitable position to bring titles home to Warrendale.

Seneca Valley’s top junior varsity team finished just two points out of first place in the Tier 1 Division, falling just short behind rival North Allegheny. It should be noted that despite three regular-season losses, Seneca played to a goal differential of +63, which ranked as the preeminent differential in their division.

The Raiders’ second junior varsity team was able to capture the Tier 2 Western Division, finishing just a point above Mars. All three of Seneca’s losses came against competition from the Eastern Division, and they were able to dress six different players with at least 15 points.

At the middle school level, Seneca’s top team struggled in the regular season, as they were only able to win four games. However, the potential is still there for a magical run considering past Seneca middle school teams.

The second middle school team dominated their regular season course, with 12 wins in 14 games. They will very likely be playing in their bracket’s championship, and in all likelihood, they will be winning it.

Seneca Valley’s five teams are in great position to make dominant postseason runs on their way to many titles for the organization.