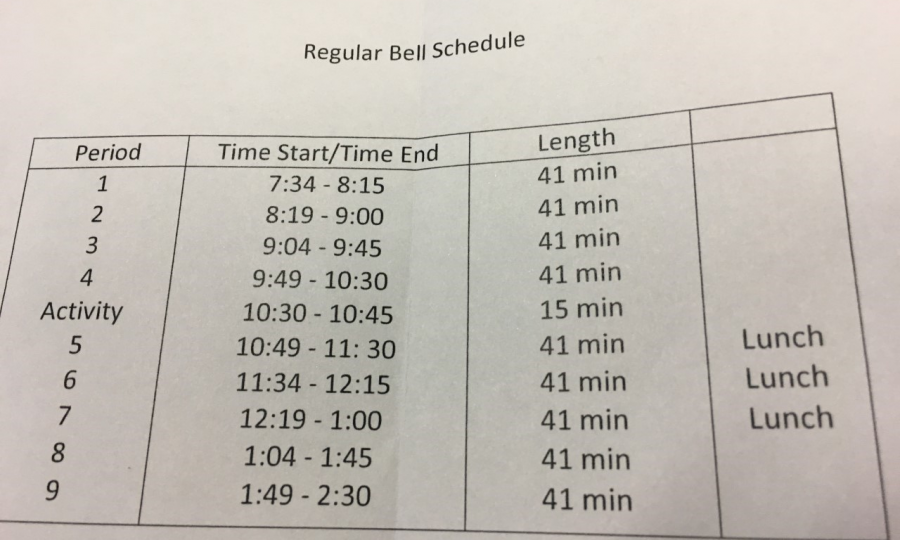 There has been a lot of talk and a lot of opinions going around about the new bell schedule planned for next year.

Activity period is now only fifteen minutes compared to our current activity period which is twenty minutes. All of the combined time that they save will now be put together to form another period at the end of the day, which brings the total of periods to a grand total of nine.

During a two-hour delay, the first four periods of the day will be twenty-seven minutes long, activity period will be four minutes long, fifth through seventh will be thirty-two minutes, and the last two periods will be twenty-eight minutes. The changes made to the schedule are slight but will definitely be noticeable.

Along with the talk of the how the new schedule will actually run, many students have their own opinions. Even the seniors, who will not even experience the changes, have put their thoughts out there on the subject.

Mikayla, a senior that was discussing the topic of the change just the other day, said that, “I think that it is kind of pointless because school still starts and ends at the same time and personally I would have only wanted a schedule change if we could get extra time in the morning.” She believes that the only way the schedule change would be that different would be if the extra time put towards lunch was put towards a later start time and earlier dismissal.

Alaina, a junior who also shared her opinion on the topic, stated that, “I think it will stop a lot of lunch problems like finding friends and there won’t be any overlapping bells.” Another junior, Eric, made a claim that, “I don’t need the extra lunch time.”

Despite the conflicting opinions on the new schedule for the 2017 and 2018 school year, this new change will be applied and everyone will experience firsthand the idea that some people are so unsure about. All Seneca Valley School District will know soon enough.