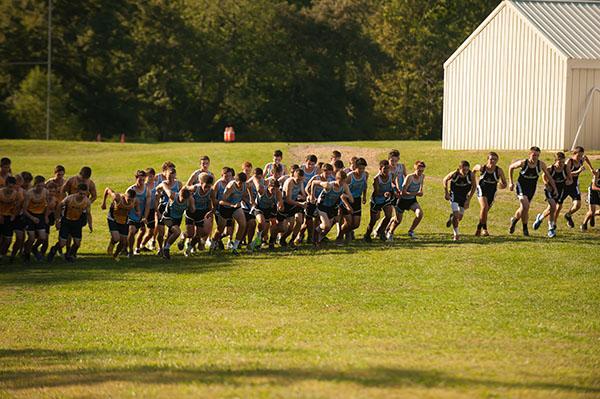 With the recent win against Knoch, the men’s cross country team at Seneca Valley secured the section championship.

The team battled their way past rival opponents to become section champs for the first time in ten years. With around thirty to forty runners on the team, the sport seems to be growing across SV and across the entire WPIAL’s.

Varsity runner Patrick Inman told the Scout, “I believe our entire team has a different mindset this year than years prior. Each and every runner on this team, from top to bottom, are all making impacts on one another. Our entire team has a dedicated mindset and a positive attitude that has really been the driving factor to our success.”

The team is led by their experienced head coach, Steven Strelick, and assistant coach, Justin Dosch. Strelick is an eighth grade science teacher at Seneca Middle School. He’s been teaching cross country for about five years and is a veteran track coach. Dosch is a big runner and he even frequently runs with his team.

When asked about his coaches, Inman said, “Our success is largely in part to our terrific coaches. These two have provided us with an opportunity to do something special this year, and we are grateful. Without their support and their coaching, it would have been tough to win sections this year.”

The team will be going into the WPIAL finals with the best chance to take the win. The race will take place on October 27 at Cooper Lake, PA. If they finish in the top three for WPIALS, the top varsity runners will move onto states in Hershey, PA on November 5.

“We all have our minds focused on winning WPIALS. That’s the main goal for a lot of us. Of course a lot of our top runners are also shooting for states, but really we’re all just trying to have fun and take in the whole experience,”  said Inman.

Some of these top runners Seneca will hopefully see at states include Sam Owori, Trey Razanauskas, and Seth Ketler. Sam and Seth are sophomores who broke onto the scene their freshman year. Trey’s a senior who’s hoping to finish out his season with a WPIAL championship and a chance at a state title.

As of now, the team is continuing to prepare and train for their WPIAL race coming up. They will face tough opponents like North Allegheny and Mount Lebanon. Even though Seneca has beat these teams before, they will still come ready to race.