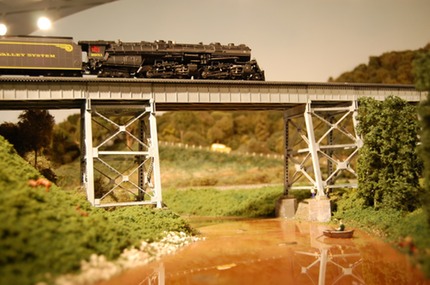 Now that Thanksgiving has passed and it is the Christmas season, the Western Pennsylvania Model Railroad Museum is open again. The museum is two floors of nothing but model trains and model train enthusiasts. Open from Thanksgiving to mid January every year, the old railroad depot attracts quite the crowd of people every year.

In this building is two floors; the first floor is pretty open with a few interactive train layouts, while the main attraction is upstairs. The giant HO scale train layout is truly a masterpiece. The layout starts at the city of Pittsburgh, Pennsylvania and follows the fictional Mon Valley System and the fallen flag railroad, the Baltimore and Ohio as they make their ways to Cumberland, Maryland. One can see realistic and very well modeled scenes such as Glenwood yard outside of Pittsburgh, the town of McKessport, the beautiful river scene by Ohiopyle, PA, and the massive Helmstetter’s Curve in Maryland.

Despite the large, impressive train layout upstairs, the first floor has great displays too. There is a four line O gauge train layout where fans can press a button to control the train. There is a similar layout for the kids, a small table with an HO version of Thomas the Tank Engine. The first floor also shows some of the great models throughout history. The museum brought together old trains from all gauges including the G gauge New York Hudson, which is on of the most expensive models of all time.

Last Christmas, the museum announced plans to expand the entire building. The plans started to be built this summer and will continue up until 2020 when the project is estimated to be completed. This includes expanding on both floor, building a new G and O scale layout on the first floor, either expanding or making a new (small) HO layout on the second floor and expanding the gift shop. The project looks to be huge and will attract a large amount of people.

If you are looking for some good holiday fun stop by the museum, for it truly is an amazing sight.