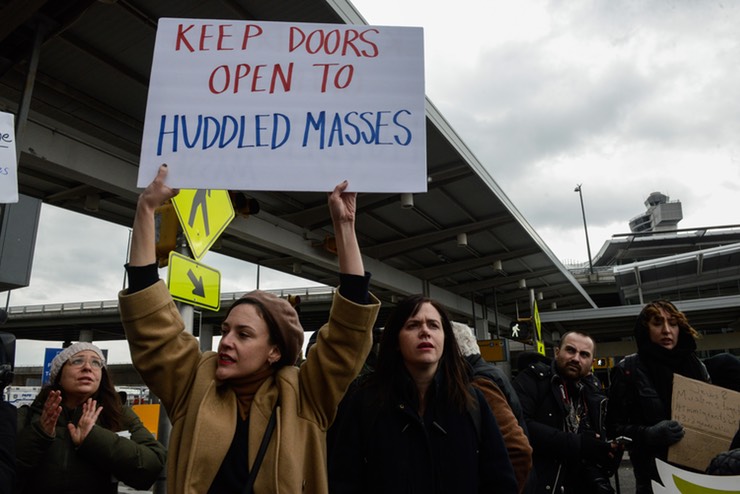 President Donald Trump has signed an executive order enacting an immigration ban that is destructive, hypocritical, and undermining of American values.

Donald Trump’s immigration ban prevents travel into the United States from seven predominantly Muslim countries: Libya, Sudan, Somalia, Yemen, Syria, Iran, and Iraq, for 90 days and bars entry to refugees for 120 days.  After further interpretation, it has been ruled that travelers with green cards will be allowed to re-enter the United States, although it had previously been thought that they were barred from entry into the U.S. as well.

This ban is the downfall of all American principles.  Immigrants founded the United States of America.  Puritans who wished to rid the Anglican Church of Roman Catholic beliefs fled to the New World after being persecuted.  After the terror they faced, battles they fought, and independence they won, those immigrants created the United States as a beacon of hope for everyone.  As it says on the Statue of Liberty, “Give me your tired, your poor, your huddled masses yearning to breathe free, the wretched refuse of your teeming shore. Send these, the homeless, tempest-tossed to me, I lift my lamp beside the golden door!”

After the past week, these words almost hurt as I read them.  “Give me your tired, your poor, your huddled masses yearning to breathe free,” but only if you are Christian.  “Send these, the homeless, tempest-tossed to me,” unless you are from a Muslim nation or trying to escape from a warzone.

Donald Trump is German and Scottish.  He might have forgotten that in the 1800s, immigrants from Scotland fled to the U.S. to escape poverty and persecution.  Another Scottish immigrant who is closer to Trump is his mother who came to America at the age of 17.  Thousands of German immigrants also fled to America in 1848 due to political persecution after rebelling against German princes.  Despite the fortune and privilege that Donald Trump now has, he would have nothing if it were not for the protection of refugees and immigrants that the United States offers.

Not only does this ban undermine the American dream of coming to a new land for a better opportunity, but it also seems to repeat some of the darker moments of U.S. history.

The Immigration Act of 1924 prevented all immigration from the geographic “Asiatic Barred Zone.”  The tension created from the ban that stopped immigration from Asia, specifically from Japan, had disastrous effects.  The strained relationship between Japan and the United States led to the bombing of Pearl Harbor on December 7, 1941, and the United States entering World War II.  Japanese-Americans were then placed into internment camps due to American paranoia that the ethnic group was a security risk.

President Trump has forgotten where this nation came from and many key pieces of its history.  Isolationism never leads to a positive ending.  We cannot let history repeat itself and turn away those who are different from President Trump’s American standards.

The United States of America is supposed to be a melting pot, filled with people of every race and religion.  We are blessed to live in the land of the free, founded by people who wished to provide their family with a better life than what they had.  An immigration ban is destructive and backwards.