Is Bryce Harper worth $400 million? 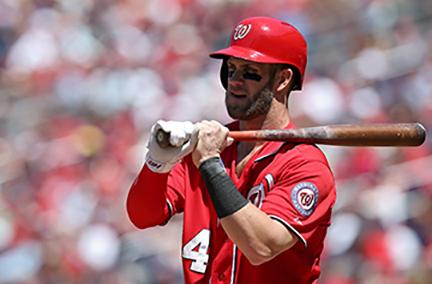 There have been quite a bit of roster moves and rumors around Major League Baseball so far this off-season. Winter meetings began this week, and trade and contract talks are heating up.

Out of all the rumors and roster moves, there was one rumor that struck me. According to USA Today, a “high-ranking” Washington Nationals’ team executive says that All-Star outfielder, Bryce Harper, is asking for at least a $400 million contract extension; his current contract ends after the 2018 season. He wants it to be a minimum of ten years, as well.

The contract that Bryce Harper plans to get could be the largest contract in baseball history ahead of Miami Marlins outfielder Giancarlo Stanton’s 13-year, $325 million contract. At the age of 26, Harper would be the highest-paid athlete in all of sports.

Is Washington willing and able to give him a record-breaking contract? Is he worth it?

To start off, I don’t think the Nationals are able to resign him to such a lucrative deal if they plan on improving and expanding upon their entire roster. All the money that he wants doesn’t seem to be there.

The Nationals ended last season with a payroll of $155.5 million, and they’ve already invested $87.4 million in 2019 salaries to Max Scherzer, Stephen Strasburg, and Ryan Zimmerman. Resigning Bryce Harper would be a major challenge for the Nationals.

He is coming off of a disappointing 2016 season. According to Bleacher Report, he batted a career-low .243 and hit 24 home runs with 86 RBI. Even though these are not eye-popping stats, they are still above-average. Could this be a sign of his decline? No, absolutely not.

Although Harper is coming off a down year, he is still very young, 24, and extremely talented. Bryce Harper won the 2015 NL MVP award after hitting .330 with 42 home runs and 99 RBI. He has the potential to be the face of Major League Baseball.

Honestly, Harper could be worth $400 million dollars at the end of 2018. He will be at the prime of his career and might be playing better than he ever has.

On the flip side, the Nationals and interested teams around league need to consider his ability to stay healthy. Harper has played five seasons in the majors. Two of those seasons were shortened due to injury. I don’t think any MLB organization would be willing to invest such a large amount of money in a young player that has been known to get injured.

In this day and age, you never know, though. The cost of “ever-increasing” talent just keeps rising.

Do I think he is worth $400 million? No, I don’t think you can put such a high price tag on a player unless they are truly a game-changer and franchise player that has proven himself.

As of right now, Harper has not proven himself as being that guy for the Nats. He needs to stay healthy and be more consistent, statistically speaking. Over the next two seasons, if we see him put up numbers like in his 2015 MVP season, we will witness Bryce Harper become the $400 million man.