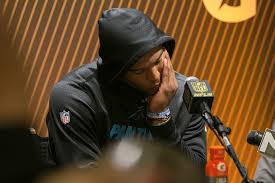 After Super Bowl 50 left hundreds of millions of viewers with plenty to talk about, most football fans reacted in many different ways to the big game’s two biggest players: Peyton Manning and Cam Newton.

The Denver Broncos’ and Carolina Panthers’ respective quarterbacks did not play extensively well in the final game of the NFL season, but Manning left San Francisco with his second Super Bowl ring while Newton’s Panthers lost the matchup 24-10. Cam, a captain of his Charlotte based team, had won the MVP award for the NFL regular season the day before the Super Bowl. He also came into the game leading the rather skilled Panthers, who were favored by many odds-makers to win the game.

But Newton left Levi’s Stadium having let many of his fans down. The former Heisman winner completed 18 of 41 passes for 265 yards, according to NFL.com. While Newton did tack on 45 rushing yards, he turned the ball over 3 times over the course of the game (his first fumble was returned for a touchdown).

Even though Newton obviously did not play to the best of his ability, it was the young star’s attitude both during and after the game that upset even some of his most die-hard supporters. The Panther’s play-caller’s pride and confidence, which is often mistaken (or maybe rightfully taken) for arrogance and selfishness, gave upset football fans ammunition to lambaste Newton during what has surely turned into the worst week of his career.

Cam Newton’s on the field struggles perhaps culminated in his second fumble, when Newton was stripped of possession by the Broncos’ (Super Bowl MVP award winning linebacker) Von Miller, and promptly refused to go after the ball, leaving his teammates to try to fend off their opponents for the ball that the defense would recover. Newton’s inaction led to another Broncos touchdown with only a few minutes left in the game, effectively terminating any chances the Panthers had of winning.

After the game, Newton walked out of a post-game interview before it had concluded, during which he could hear celebratory noises coming from the Broncos’ locker room. He received heavy backlash for this stunt especially, with many claiming that the league’s MVP shouldn’t act like such a “sore loser”.

It seems as though many people were quick to assail Newton, a still young player. Granted it was borderline inexcusable to not go after the fumble, and Newton theoretically should not have treated the post-game proceedings in the manner in which he did, fans seem to forget that this is not the first time that a Super Bowl losing quarterback had displayed “unsportsmanlike” tendencies. In fact, after his loss in 2010 to the Saints, Peyton Manning (who at the time played for the Indianapolis Colts) walked off the field without shaking any hands, which certainly went against common league courtesy.

So what differentiates between competitiveness’s positive connotation and Newton’s “childlike” behavior? Some pundits have claimed that race is the reason that Newton was so publicly berated, but others feel as though Newton’s cavalier, heart-on-his-sleeve attitude led the masses to ridicule the 5 year professional. Whatever the reason may be, Newton’s rough Sunday night will leave him with a lot to prove when next season comes around.