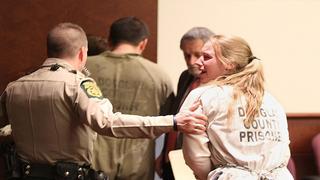 A couple was sentenced to prison time on Monday, February 27, after they made armed threats to African-American children at a birthday party.

The Georgia couple included, Jose “Joe” Torres, who was sentenced to 20 years, with 13 years in prison. According to CNN, a jury convicted him on three counts of aggravated assault, one count of making terroristic threats and one count of violating of Georgia’s Street Gang Terrorism and Prevention Act.

Kayla Norton, on the other hand, was sentenced to 15 years, with six years in prison. She was reportedly convicted on one count of making terroristic threats and one count of violation of the Street Gang Act.

Torres and Norton were charged after joining a dozen other people and driving around Douglas County in multiple pickup trucks on July 25, 2015. According to CNN, many of the passengers belonged to a group called “Respect the Flag.”

The group then passed a child’s birthday party where they then proceeded to use derogatory racial slurs against the victims.

The district attorney’s office posted on its official Facebook page, “The convoy of trucks passed by the victim’s residence where the victims were grilling hot dogs and hamburgers while hosting a child’s birthday party featuring a bouncy castle, snow-cone machines, and a DJ.”

The statement continued, stating, “Torres, who had retrieved a shotgun from his vehicle, pointed his shotgun at the group of African American party-goers and stated he was going to kill them while his co-defendants stated that ‘the little ones can get one too,’ referring to the young children at the party.”

“Many people tried to make the case about simply flying the Confederate Battle Flag,” Douglas County District Attorney Brian Fortner said in a statement. “This case was about a group of people riding around our community, drinking alcohol, harassing and intimidating our citizens because of the color of their skin.”

Melissa Alford, who hosted the birthday party stated that she felt that justice had been served.

At the sentencing, she said, “I think Judge Beau McClain did what he had to do. I know justice was served.”

Alford concluded, “Yes, I did forgive them. They have to learn to forgive themselves for their wrongdoing.”

The fate for the remaining Respect the Flag members has yet to be determined, however, CNN reports that they have all plead guilty to similar charges.

As for Norton and Torres, they are reportedly banned from Douglas County even after their release from prison several years down the road.