Another side of Trump during his address 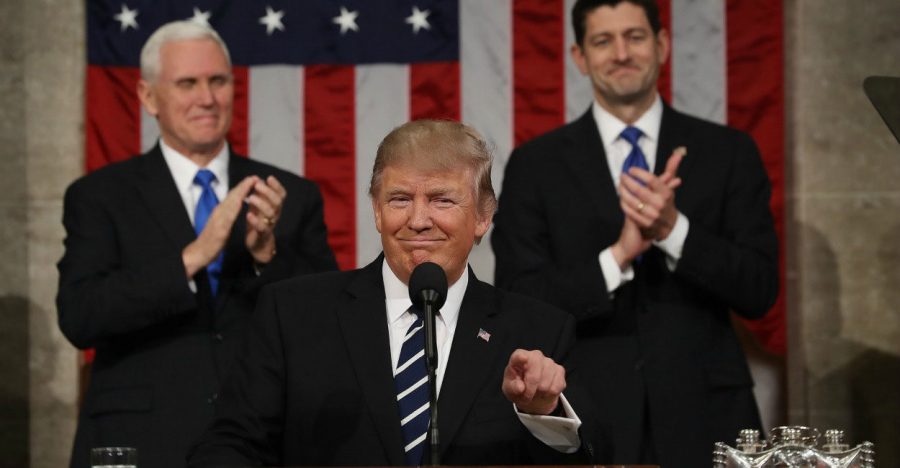 On February 28, 2017, President Donald Trump made his first address to congress and if you weren’t sitting down watching his speech, here is what you missed.

“Thank you very much. Mr. Speaker, Mr. Vice President, members of Congress, the first lady of the United States, and citizens of America, tonight, as we mark the conclusion of our celebration of Black History Month, we are reminded of our nation’s path toward civil rights and the work that still remains to be done,” began President Trump after being officially introduced.

A huge total number of 47.7 million viewers watched as Trump delivers his speech, as what many people are calling, “Trump at his most presidential.” Mike Pence even made a statement after standing behind Trump throughout the speech saying, “The Trump I saw last night is the one I’ve seen all along.”

Trump mentioned numerous issues throughout his address from his actions taken to get businesses such as Sprint, Ford, and Walmart to invest “billions and billions” of dollars in the United States to create “tens of thousands of new American jobs,” to the issue of terrorism and its effect on our country, then onto some coverage on the prices of medicines and the ease of illegal drugs coming in to the United States.

One of the most talked about aspects of Trump’s first address to congress would be his emphasis on the hate crimes that have occurred in this country that must be stopped. He went on to explain that by standing united, we can condemn hate and create a safer and overall better for our children to thrive in.

Another topic was his view on terrorism in the United States. President Trump stated, “It is not compassionate, but reckless to allow uncontrolled entry from places where proper vetting cannot occur.”

He referenced the wall, honored many people such as Maureen Scalia, who was the wife to late Antonin Scalia who was a Supreme Court Judge, Megan Crowley who is a survivor from a terrible disease called Pompe disease, and Susan Oliver and Jessica Davis, whose husbands were killed while on Duty in California, he supplied statistics, facts, and what America wanted to hear.

The speech lasted about an hour and received numerous standing ovations. Trump brought up many expected topics but at the same time, avoided others. Some topics that were expected but never brought up were Russia, deeper discussion on Medicare and health related issues, and more.

Overall, this speech was seen by America as being Trump’s best yet. As President Trump said in his final statement, “Thank you, God bless you, and God bless the United States.”