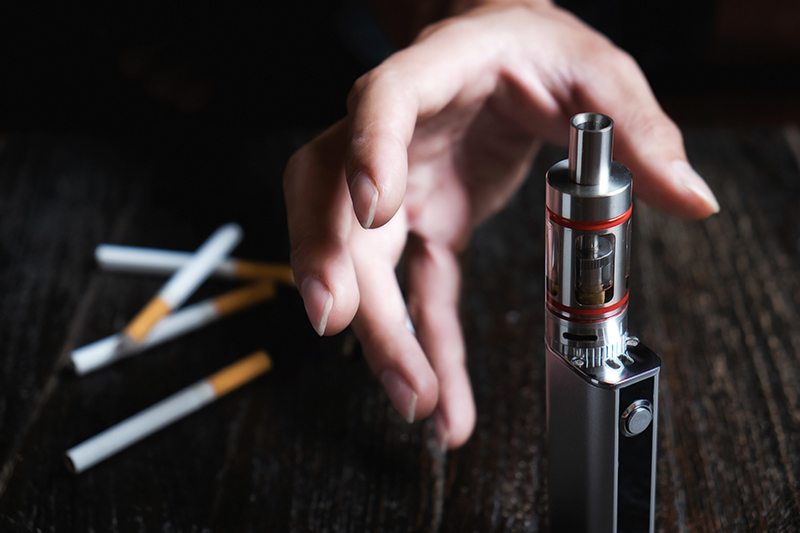 Many people have turned to vaping over the past several years as an alternative to tobacco products, but new toxicology reports suggest that electronic cigarettes may not be as healthy as they appear.

Vaping, the process of inhaling and exhaling water vapor produced by an electronic cigarette or similar device, has widely been thought to be harmless compared to smoking traditional cigarettes. The most common are pen-shaped rechargeable devices that have a refillable tank that holds a nicotine-laced liquid flavor compound. The liquid is then vaporized and inhaled by the user.

Many smokers utilize vaping devices as a healthier alternative to traditional cigarettes, but there is little evidence to suggest that electronic cigarettes are any less harmful than tobacco cigarettes. Now, studies are bringing information to light that suggests the devices could be just as harmful, if not worse.

According to ScienceNews.org, a group of toxicologists from various universities reported February 11 and 12 at the American Association for the Advancement of Science annual meeting on their findings regarding the health concerns associated with vaping. Ilona Jaspers of the University of North Carolina at Chapel Hill presented unpublished data that she and the others found at the meeting that link e-cig products to a host of new risks. Vaping may not eliminate risks associated with conventional smoking, and Jaspers explain that electronic cigarettes, “may actually be introducing new ones.”

The group examined scraped cells from the noses of otherwise healthy people who had a history of smoking, vaping or doing neither. The researchers then measured the activity levels of 594 genes within the cells associated with the body’s ability to fight infections. Among smokers, the activity of 53 genes was substantially diminished, compared with people who neither smoked nor vaped. Among vapers, those same 53 genes showed significantly diminished activity, Jaspers reported, as did 305 more. The diminished activity within the genes suggests a higher susceptibility to infection within the lung and nasal tissue.

To test the theory of increased susceptibility to infection as a result of vaping, Jaspers’ team collected immune cells from healthy human volunteers, then exposed them to flavored liquids used in e-cigarettes. Tested cells included blood neutrophils and lung macrophages, both normally tasked with killing bacteria. Some of the liquids proved “disturbingly effective at suppressing the ability of those immune cells to do their job,” Jaspers reported.

Evidence to suggest that electronic cigarettes could have dangerous effects has only begun to emerge, but the data collected from these experiments should be used as a precaution to anyone currently using vaping products.