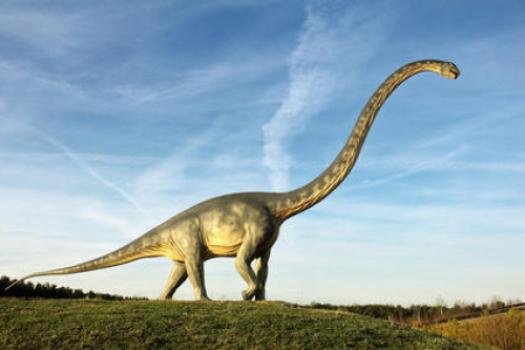 In the Patagonian desert region of Argentina in 2014, after 18 months of digging, a team from the Musea Paleontologico Egidio Feruglio lead by José Luis Carballido unearthed fossils a Titanosaur.

“This animal is so new it doesn’t even have an official species name yet,” said Mark Norell, chairman and Macaulay Curator at the natural history museum. It does however, fall into the group of Titanosaurs. Creatures of enormous lizard-like bodies, with small heads, whip-like tails, and walk on all four of their thick legs.

This behemoth is so big that it can’t even fit entirely in the gallery it is being showcased in, instead its 39-foot long neck will stick out into the entry passageway to greet visitors to the museum, and judging from the size of the legs found, it stood around 20 feet at the shoulder, these lofty numbers are heavily suggesting this may be the largest dinosaur ever unearthed by man. It even shatters our current largest living animal, the blue whale, which falls 30 feet short of the dinosaur in question here.

Scientists were able to calculate this giant weighed up to 70 tons, taking into account that the average African Elephant weighs around 7 tons. Also, one of the previously known as gigantic dinosaurs, the Braichiosaurus, weighed between 25 and 50 tons, and that really puts into perspective that this dinosaur truly was larger than life.

The exact creatures the team unearthed were young adults, and also from three distinct periods around 100 million years ago, when the roamed the green jungles of Patagonia. Paleontologists think they died in three distinct periods, however it is not clear exactly when. The time span ranges anywhere between a few years and centuries apart.

“Titanosaur fossils have been unearthed on every continent, and an abundance of discoveries in recent years has helped us appreciate the deep diversity of this group,” said Michael Novacek, the museum’s senior vice president and provost for science.

The discovered bones aren’t exactly what is being put on display, more like fiberglass replicas, but will still only be shown for a limited time.