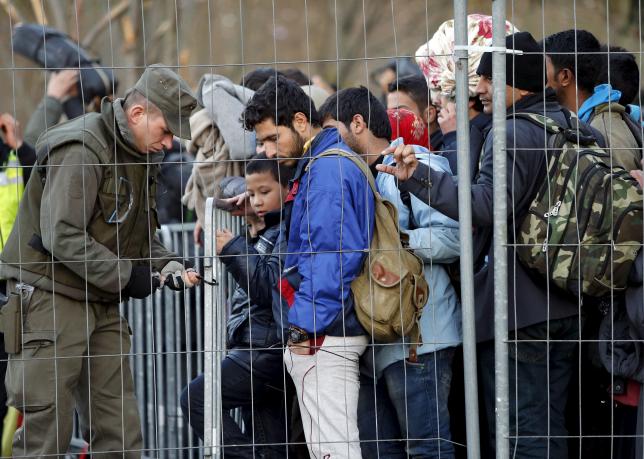 An Austrian soldier fixes the fence as migrants wait to cross the border into Spielfeld in Austria from the village of Sentilj, Slovenia, October 31, 2015. REUTERS/Srdjan Zivulovic

According to NBC News, The United Nations refugee agency (UNHCR) has reported that a record-breaking number of refugees entered Europe last month. That number is almost the same as the number of all of the refuges who entered in 2014.

A spokesman for the UNHCR, Adrian Edwards, told the press that 218,394 migrants and refugees  came to Europe by sea in the month of October. “That makes it the highest total for any month to date and roughly the same as the entire total for 2014,” the spokesman said, according to Reuters.

Edwards spoke to NBC News, and said that while the UNHCR had predicted 700,000 for the entire year of 2015, those numbers have already been surpassed as the agency has estimated that there are more then 744,000 arrivals so far.

The fact that arrivals could make it overall was a big surprise due to deadly weather standing in their way. The major of one of the islands that has refugees coming in (Lesbos), Mayor Spyros Galinos, told NBC, “Throughout last week the weather was really bad but the influx did not decline,” and went on to call their survival through rough waters to be a factor of “pure luck” considering their vehicles of travel were poorly made and considered to be “floating caskets” due to the fact that their boats were rotting.

The International Rescue Committee’s emergency program coordinator on Lesbos, Kathryn Sokol, spoke to NBC about the shocking numbers, “We expected August and September to be the highest months and there was anticipation of a decrease because of the winter coming, but so far, we haven’t seen even the slightest decrease. There is a sense of urgency.”

Reuters reports that on a single day, Oct. 20 to be specific, 10,006 refugees arrived in Greece as well as that now 53 percent of arrivals are Syrian which makes sense because of the ongoing civil war Syrians are facing. And at 18 percent, Afghans are second.

According to Reuters, Edward spoke about the future flow of refugees, “Certainly in 2016, we have to expect this level of arrivals to continue, and that’s because the facts that are causing people to move aren’t going away. It is the new reality that we all have to deal with. We hope that there will be some reductions in the number of people crossing this year, simply to help with the manageability of the situation, but unfortunately, the underlying causes that are making people move across the Mediterranean to Europe are still there.”