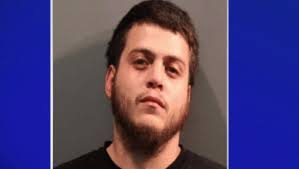 Police have arrested and jailed Michael Santiago, the 25 year old father of the 6 year old child who shot and killed his younger brother.

According to CNN.com, Santiago was charged with child endangerment after his son found his loaded firearm on top of the refrigerator, wrapped in a pair of pajama pants.

CNN’s website also reported that the two brothers were playing a game of “cops and robbers” when the younger brother was shot. The child later died in a hospital.

It is being reported the purpose for Santiago’s possession of the firearm was due past affiliations with gang members.

The grandfather, Israel LaSalle, who was in charge of watching over the boys at the time of the murder, sent the boys into the basement to retrieve something to clean up after their dog. Shortly afterwards, the 3 year old boy was shot, according to LaSalle.

When asked about the incident, LaSalle stated, “I heard a pop, you know, like somebody had shot, so I opened the door and I look out and he was running up the stairs and he told me somebody shot his brother.”

The grandfather went on to tell a radio station in Chicago called WLS, “”You know how kids are, they get into everything. There is not a safe place where you can put a gun where a kid can’t reach it or find it.”

This recent incident of accidental misuse of a firearm has yet again aroused the public to question the current gun laws. Adding fuel to the fire is the very notable fact that a child as young as 6 has taken a life, which has ignited yet another controversy to the current way guns are handled in the United States.

One of the most chilling facts about this topic is that the accidental death of minors due to firearm misusage is not an entirely uncommon event. In fact, CNN stated on their website that, “According to the Centers for Disease Control and Prevention, sixty-nine children under the age of fourteen died from accidental firearms discharges in 2013. Of those, thirty were younger than five.”

Places such as California, Minnesota, Massachusetts, and the District of Columbia hold gun owners accountable in cases where a minor is technically responsible for the injuries or deaths obtained in the accidents. The fault is placed on the parents in these cases for “carelessly” leaving these devices in areas easily accessed by children.

Santiago will be charged for the unintentional murder of his 3 year old son and is currently being held in lieu of $75,000 bond.