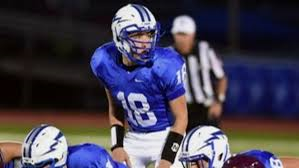 According to CNN’s website, Evan Murray, a senior Quarterback for Warren Hills Regional High School in New Jersey, died on Friday, September 25th. His death is said to be caused by injuries sustained during a football game.

Murray, age 17, was reported by foxnews.com as being hit on the backfield before allegedly walking off of the sidelines while telling his teammates he felt “woozy”. He later was reported to have reassured them that “he would be fine”.

Shortly afterward the quarterback was said to have collapsed on the sidelines. As he was escorted off the field he reassured the audience of his safety by signaling a thumbs up, only to later die that evening in the hospital.

His teammates were devastated to hear about their quarterback’s death shortly after their game, which they lost by two points.

“We are deeply saddened and sincerely appreciate the support and caring of our close-knit greater Warren Hills community,” said Gary R. Bowen, Interim Superintendent at the high school.

FOX reported that Morris County Medical Examiner Ronald Suarez claimed that Evan Murray had an abnormally large spleen which made the teenager more susceptible to injuries. But despite this, Murray is said to have had no head trauma and his death has since been ruled as an accident.

Evan Murray was held as a very popular student at the school and was known to excel in sports. Besides being the quarterback for his high school team, Murray also played baseball and basketball.

Since the devastating loss, fellow student and friend Taylor Coughlin, has set up a GoFundMe page to assist the Murray family during this devastating time, according to NJ.com.

“He was an amazing student and an amazing athlete. He stood out in his athletics, his academics — everything,” Coughlin stated on the website.

A memorial was held in Murray’s honor the following Saturday in which hundreds of students, teachers and his teammates attended. Monday morning the parking spot Evan Murray typically occupied was filed with flowers and balloons in remembrance of their fellow student. Warren Hills Regional High School has also stressed that there will be grief counselors present for any student needing open discussion about their loss.

The result of this tragic event has been an entire nation voicing their condolences and collectively morning the loss of the young football star.