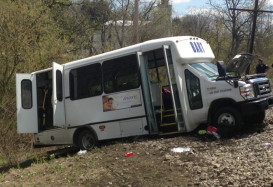 John D. Burkett, of Zelienople, passed away this past Saturday from injuries that resulted from the bus-train accident that happened last month in Evans City.

On April 26, 2013, a Butler Area Rural Transit bus, carrying ten elderly and mentally challenged people, was struck by a train at the Maple Avenue crossing in the small town of Evans City.

Burkett was one of the two critically injured people from the accident, and was flown by helicopter to a hospital in Pittsburgh where he received treatment that same day. The other passenger flown by medical helicopter was Claudette Miller, of Callery, who died just hours after the impact.

Burkett had just been transferred days before his death from the shock trauma unit at Allegheny General Hospital to the VNA Impatient Hospice in Butler, according to his obituary.

Joe McCombs, Evans City’s Police Chief, made a statement that the bus was “heading east towards South Washington Street at about 8:15 a.m. when witnesses said it stopped for an unknown reason on the tracks while the train was approaching.”

McCombs proceeded to claim that the freight train did, in fact, blow its horn before hitting the bus.

Michael Pawk, the attorney for the bus’s driver, Frank Schaffner, announced that his client told him he did not stop the bus on the railroad tracks.

According to the Tribune Review, Pawk claimed that Schaffner, a 59-year-old Butler resident, did stop the bus before proceeding to cross the tracks.

Police are currently continuing their investigation on the crash.

Burkett’s family has announced funeral arrangements for Tuesday, May 7, 2013 from 2 to 4 p.m. and 7 to 9 p.m. at the Boylan Funeral Home in Zelienople.

Contributions in Burkett’s honor may be issued in support of the St. Peter’s Reformed Church or to the VNA Impatient Hospice.

(emailed you my picture!)