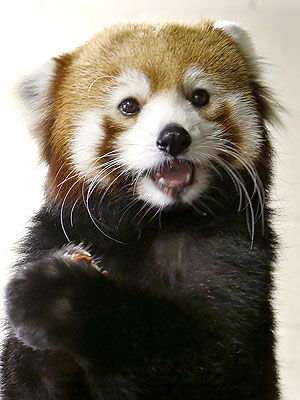 The Pittsburgh Zoo and PPG Aquarium was a little ‘wide-eyed and bushy-tailed’ this past Thursday when they welcomed their very first red panda into their family.

Xia, a two-year-old red panda from the Red River Zoo in North Dakota, is the newest attraction to the Asian Forest section of the zoo.

Debuting April 4, guests and workers alike were more than eager to unveil the exhibit. Henry Kacprzyk, curator of Kids’ Kingdom & Reptiles, told WTAE this past weekend, “This is the first time we  have had a red panda at the zoo, so we are very excited.”

Although deemed a ‘panda’, the specie is actually classified with raccoons and bears, as well as, giant pandas. A zookeeper stated, “They’ve kind of settled on their own group. If you look back tens of millions of years, they have common ancestry, but today they’re one of a kind.”

Upon hearing about the arrival of Xia, zookeeper Ray Bamrick designed a sort of ‘play area’ made of wood in order to keep the red panda active and healthy.

But sadly, the number of red pandas left in the wild is quickly dropping.

“There’s about 2,500 left in the wild,” Xia’s handler explained. “And they’re found in southern China, and the Himalayan Mountain areas. So they’re in about five different nations.”

Nevertheless, Xia has been soaking up the spotlight this past week- and she is loving every minute of it.

Zoo officials say that she walks alongside the inside of the glass each time a guest passes with a look of curiosity and playfulness.

The Pittsburgh Zoo has high hopes that Xia will be bringing in some extra revenue for the wildlife refuge, and their assumption is looking pretty spot-on.