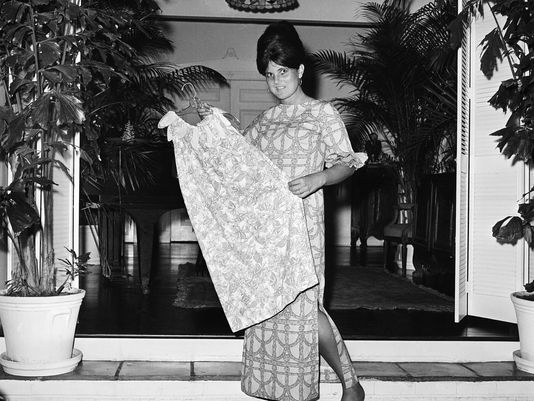 Southerners and sorority girls everywhere took a moment to mourn the loss of a style icon on Sunday.

Iconic fashion designer Lilly Pulitzer Rousseau died Sunday in Palm Beach, Florida, surrounded by family, according to an announcement on her company’s official Facebook page. She was 81.

“Lilly has been a true inspiration to us and we will miss her,” the statement said. “In the days and weeks ahead we will celebrate all that Lilly meant to us. Lilly was a true original who has brought together generations through her bright and happy mark on the world.”

The designer became famous when former high school classmate, and then First Lady, Jacqueline Kennedy, was photographed wearing one of her dresses while on vacation. The dress “was made from kitchen curtain material — and people went crazy,” Pulitzer said in her book, “Essentially Lilly: A Guide to Colorful Entertaining,” excerpted on her company’s website. “They took off like zingo. Everybody loved them, and I went into the dress business.”

She opened an orange juice stand in Palm Beach and designed colorful cotton shirts for herself to work in comfortably as well as hide any stains she may receive. Soon, customers wanted to buy her shirts as well as the orange juice.

She began a collection of informal dresses, called “Lillys,” and then began designing clothes for girls and a men’s sportswear line.

Nowadays the Lilly Pulitzer stores are full of vibrant patterns as well as traditional styles that are still a big hit with the female population.