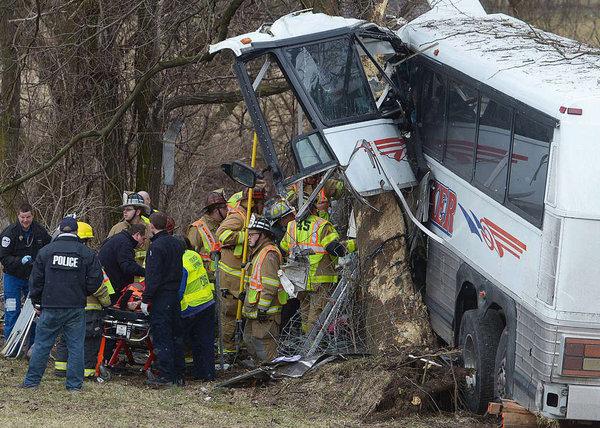 A bus carrying the Seton Hill women’s lacrosse team went off the Pennsylvania Turnpike on Saturday and crashed into a tree, killing a pregnant coach and the driver and sending others to multiple hospitals. The lacrosse team was headed to play Saturday afternoon at Millersville, about 50 miles from the crash site in central Pennsylvania. The Griffins were off to a 3-1 start to the season. Both Saturday’s game and a Sunday home game were canceled after the crash.

Head coach Kristina Quigley was flown to a hospital and died there from injuries from the crash. Quigley was about six months pregnant and her unborn child did not survive either. The driver of the bus Anthony Guaetta died at the scene of the crash. Two other victims were flown by helicopter to Penn State Hershey Medical Center. Officials said all other passengers were taken to hospitals as a precaution.

Quigley, a native of Baltimore, was married and had a young son, Gavin, the school said. She was in her second season as head coach and led the Griffins to 11 wins last year. She came to the school from Erskine College in Due West, S.C., where she started the school’s Division II program. She also worked as an assistant coach at Duquesne, her alma mater in Pittsburgh, the school said.

The bus came to a stop upright on the side of the road with part of its left side shorn off.  It’s unclear whether that was from the impact or rescue operation. The bus operator, Mlaker Charter & Tours, of Davidsville, Pa., is up to date on its inspections, which include bus and driver safety checks, said Jennifer Kocher, a spokeswoman for the state Public Utility Commission, which regulates bus companies.

The agency’s motor safety inspectors could think of no accidents or violations involving the company that would raise a red flag, she said, though complete safety records were not available Saturday. State environmental officials were also sent to the scene because of a diesel fuel spill from the bus.

According to a press release, Seton Hill University freshman Amanda Michalski filed the lawsuit against Mlaker Transportation. The lawsuit in Allegheny County Court seeks unspecified damages and says the driver “failed to keep the bus under proper control” and “was otherwise negligent and reckless” when the bus crashed Saturday in Cumberland County as per CBS Pittsburgh.

In an interview conducted with a Seton Hill freshman, she stated that “the scene of the crash on Saturday was a very controlled chaos. Their was constant sirens, and a lot of confusion from the team but a well prepared emergency response team.” She was not at the scene for long though, as she was taken on a stretcher to a nearby hospital for injures sustained from the crash. She stated that the team continues to remember Coach Quigley and would ask that you keep the injured players and the family of Coach Quigley in your thoughts.