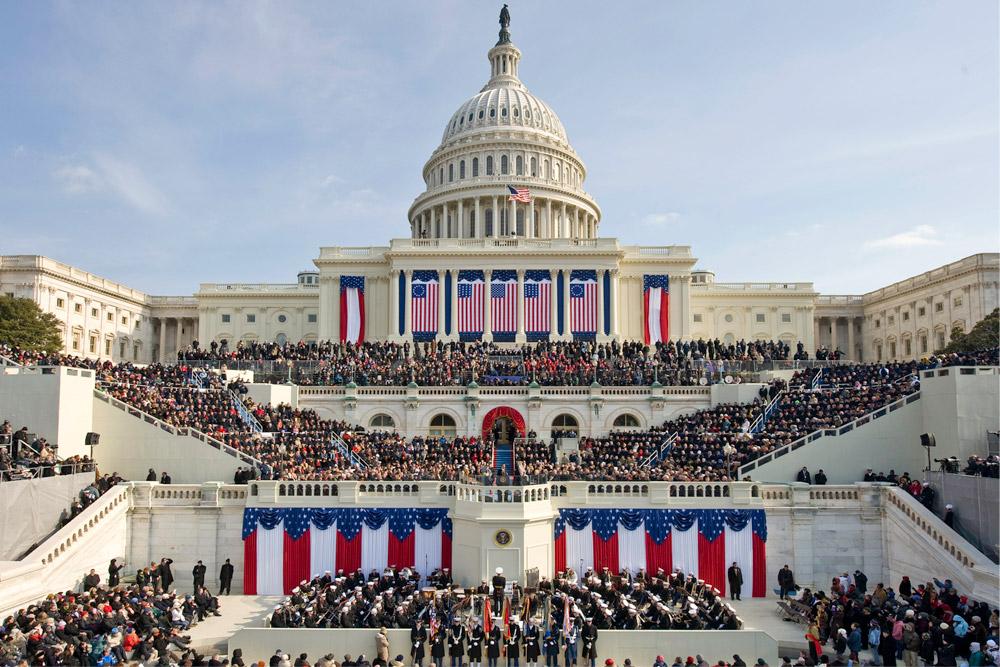 The second Presidential Inauguration of Barack Obama was held in Washington DC on Monday, January 21, 2013.

The 20th Amendment states that the President must take the Oath of Office on January 20. Since the date fell on a Sunday, a private swearing-in ceremony was held on that date and the public ceremony and parade were held on the following day. The official theme for the 2013 inauguration was “Faith in America’s Future,” commemorating the United States’ perseverance and unity, marking the 150th anniversary of the Emancipation Proclamation and the placement of the Statue of Freedom atop the Capitol Dome in 1863.

The oath of office was administered on the steps of the U.S. Capitol in Washington, DC. Music was brought to the program from the United States Marine Band, Brooklyn Tabernacle Choir, James Taylor, Kelly Clarkson and Beyonce. The Invocation was given by Myrlie Evers-Williams and a poem was read by Richard Blanco. The Oath of Office was administered to Vice President Joseph Biden, by Associate Justice of the Supreme Court, Sonia Sotomayor and the Oath of Office was administered to President Barack Obama by the Chief Justice of the United States, John  Roberts. Following the oath of office, the President gave his inaugural address, setting out his vision for America and goals for the nation.

The Inaugural Parade featured eight official inaugural floats, sixty groups including marching bands, mounted units, cultural organizations, and members from all branches of the Armed Forces of the United States. More than 8,800 people and close to 200 animals participated in the parade down Pennsylvania Avenue.

Due to the economic conditions of the country, the inaugural celebration was cut back to include just two official parties plus a concert honoring military families. The Commander-in-Chief ’s Ball was provided free of charge to all invited guests, who included active duty and reserve military, Medal of Honor recipients, and Wounded Warriors and their spouses. The Inaugural Ball brought together members of the public, grassroots volunteers, local community leaders and supporters, various organizations, and local and state elected leaders. Both events were held at the Washington Convention Center to simplify security. Many unofficial inaugural balls and galas were also sponsored by a variety of organizations and held throughout Washington, DC.