Bionic Man Climbs to the Top of Chicago Skyscraper 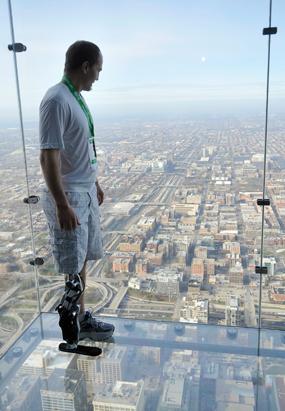 Sunday morning, Zac Vawter climbed 103 flights of stairs with his Bionic leg, becoming the first person ever to complete this with a mind-controlled prosthetic.

Every year the Rehabilitation Institute of Chicago holds a charity even called “Sky-rise Chicago” at one of Chicago’s tallest Skyscrapers, The Willis Tower. Vawter and thousands of others participate in this race to the top, in support of the RIC.

A couple years back, Vawter lost his leg in an motorcycling accident, and when he came to RIC,  Levi Hargrove, the head researcher at the Institutes Center for Bionic Medicine offered Vawter a chance to work on a project with a Bionic Leg. The $8 million project was being funded by the U.S. Department of Defense, Vanderbilt University, The Massachusetts Institute of Technology, University of Rhode Island, and University of New Brunswick. Vawter was eager to start.

“A lot of people say that losing a leg is like losing a loved one,” said Vawter to CBS News. “You go through a grieving process. You establish a new normal in your life and move on. Today was a big event. It’s just neat to be a part of the research and be a part of RIC.”

Vawter and a team of researchers spent months before the climb, preparing him and making sure that the leg would respond to Vawter‘s thoughts. When November 4 came around, he was ready.

“Everything went great,” Said Vawter at the end of the climb, “The leg did its part, and I did my part.”

Proud of the project, Hargrove said, “We’ve come a long way, but we have a long way to go…We need to make solid devices, more then a research prototype.”

Vawter is returning home to his wife and two children, in Yelm, Washington, with a  new life and a proud accomplishment.