Sandusky Sentenced to at Least Thirty Years in Prison 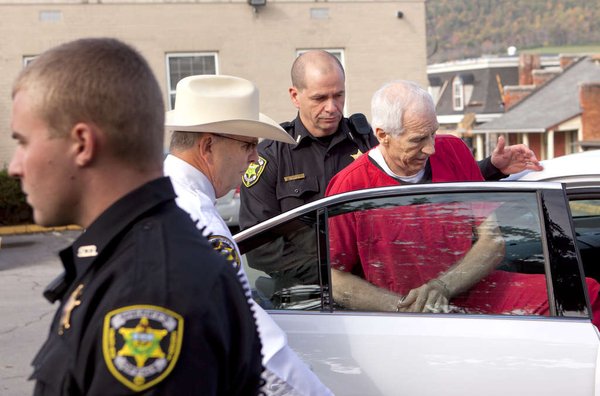 Jerry Sandusky is led to a police car after his 30 to 60 year sentence. (Photo: Ed Hille, Staff Photographer at the Philadelphia Inquirer)

Jerry Sandusky is probably going to spend the rest of his life in jail; the former Penn State University assistant football coach was sentenced to at least 30 years in prison.

Sandusky faced up to 400 years in prison for 45 convictions of child sexual abuse, but Judge John Cleland instead ruled that Sandusky would not be eligible for parole for 30 years with a maximum sentence of 60 years.

Cleland passed over a centuries-long sentence because “it makes no sense for a 68-year-old man. This sentence will put you in prison for the rest of your life.”

His attorneys have ten days to appeal the judge’s decision.

The judge designated Sandusky as a sexually violent offender, which will partially determine where he will be housed in prison, as he could become a target for other inmates. According to the Pennsylvania Department of Corrections, of the 26 prisons for men that he could be sent to, none have a special housing unit for sex offenders.

Sandusky repeatedly denied the accusations and told Cleland, “They can make me out as a monster, but in my heart I know I didn’t do these alleged, disgusting things.”

His repetitious denials have outraged the victims and their families.

A statement from Victim 9’s mother read, “For four years, I believed you were helping my son but instead you were molesting him. He was losing weight, couldn’t sleep. I blame myself and still do… I have had to endure two attempts from my son on his own life, all because of you and what you did to my son.”

The statement also said, “You took something from him that can never be replaced. Sorry will never be enough. There is no punishment sufficient for you. When you admit your wrongdoing, maybe, maybe you will be forgiven.”

“Our thoughts today, as they have been for the last year, go out to the victims of Jerry Sandusky’s abuse,” said Rodney Erickson, the president of Penn State University, in response to Sandusky’s sentence. “While today’s sentence cannot erase what has happened, hopefully it will provide comfort to those affected by these horrible events and help them continue down the road to recovery.”