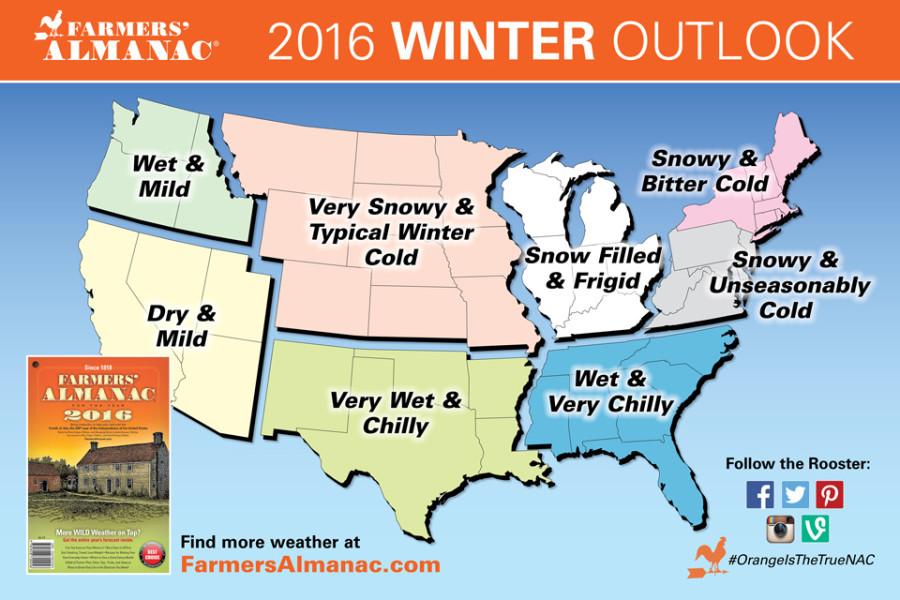 Two conflicting theories are forecasting drastically different predictions for the outcome of this year’s winter season.

El Niño, a shift in ocean currents and trade winds in the Pacific Ocean that occurs every two to seven years, is expected to bring an exceptionally mild winter to North America.  On the other hand, the Farmer’s Almanac, a publication printed since 1792 that bases weather predictions off a scientific formula, is calling for a remarkably bitter winter even in temperate parts of the continent.

Many people still put stock in the traditional methods used by the Farmer’s Almanac; most recently, it accurately predicted heavy snow for the winter of 2015, which proved true when New England was hit by a massive Nor’easter in January.

However, the Farmer’s Almanac is often criticized by meteorologists for being unscientific in comparison to modern methods of weather prediction.  “The almanacs are certainly fun and even have useful information, but it is important for the public to understand that modern weather forecasting uses advanced computer models and technology — and is actually pretty good out to about a week or so,” Dr. Marshall Shepherd, director of the University of Georgia’s Atmospheric Sciences Program, told CBS News.

The National Oceanic and Atmospheric Administration (NOAA) released the official U.S. winter outlook on October 15 and explained how El Niño will set the stage for a temperate winter.  NOAA’s website explains that, “Above-average temperatures are favored across much of the West and the northern half of the United States,” and “wetter-than-average conditions most likely in the Southern Tier of the United States, from central and southern California, across Texas, to Florida, and up the East Coast to southern New England,” will be a result of this year’s weather patterns caused by El Niño.

Devout believers of the Almanac maintain the argument that no method of weather prediction, including the forecasts that meteorologists give daily, is always one hundred percent accurate.

Janice Stillman, editor of the Farmer’s Almanac, told the Albany Herald, “We had a 96.3 percent accuracy rate in our forecast last year, and we’re thrilled with that.  It’s well above our traditional 80 percent.  If El Niño comes in and turns everything upside down in our forecast, that’s OK because we just had a terrific year and we’ll be back again.”