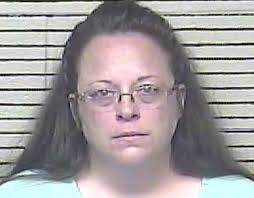 After returning back to her job as a Kentucky clerk on September 14th, following her nearly eleven days of arrest, CNN.com reported that Kim Davis has still refused to issue marriage licenses to same sex couples.

According to NBCNews.com, Rowan County deputy clerk Brian Mason has been issuing licenses in her absence, despite his superior’s decisions not to do so. However, now that Davis has retaken office and reinstated her beliefs, there is a general fear for Mason’s career (which can be cut on Kim Davis’s order) as well as the overall community as Kim Davis continues to force her religious beliefs on the citizens.

Davis has been extremely public and shameless about the Christian beliefs she claims are holding her back from distributing these licenses. Despite these very strong opinions, according to the christianpost.com she became a Christian a mere 4 years ago, also contributing to the scrutinization of her character. This, and her harassment and discrimination of same sex couples, has thrown her under the fire of social media outrage.

Before her arrest on September 3rd, 2015, video footage was released of her arguing with a same sex couple asking for a marriage license. The video quickly gained views, and with that, the authorities’ attentions quickly turned to investigating Davis’s crimes. After ruling that she was deliberately disobeying a Supreme Court ruling, she was imprisoned.

The majority of social media users were pleased with the officials’ decisions to imprison her, claiming that she was infringing upon people’s human rights to love who they love, as well as defying the Supreme Court’s ruling.

Some, however, agree with Davis’s disapproval, there was a small group of supporters rallying for her at a public celebration in honor of her release from prison. Those in attendance were strongly against gay rights, and claimed that her arrest was a violation upon a person’s right to religious freedom.

At the celebration, Survivor’s song “Eye of the Tiger” was oddly the theme of the event, and has raised eyebrows everywhere about the song choice. According to GQ.com, the band released an official statement on their Facebook page saying, “NO! We did not grant Kim Davis any rights to use ‘My Tune –The Eye of the Tiger.’ However, this has yet to be confirmed as true.

The entire scandal has set the internet ablaze with various hate comments and arguments inspired by the 49 year old’s decisions. The majority of these voiced opinions are against her judgments, as they argue that “love is love”.

Kim Davis remains stubborn on her decision and does not appear to be changing her tune any time soon. Whether Kim Davis will ever change her opinions due to backlash, or whether officials will need to pursue further action in the matter, remains to be seen.