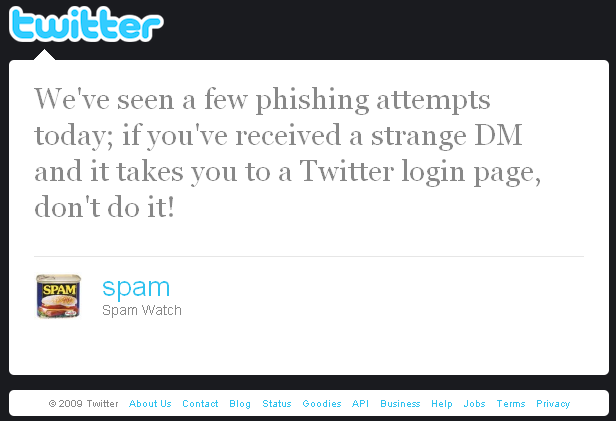 “There are some really nasty things being said about you here.”

“Hi thx 4 the follow! Are you looking to build your Twitter following? Check this out and earn $$$ doing it!”

Most Twitter users will recognize these statements. That’s because they’re a part of the recent spamming spree on Twitter, normally going on through regular Tweets or direct messages (DMs). The users tweeting these messages aren’t aware they’re doing it; their account has been compromised by a hijacker and is automatically tweeting or messaging for the user.

There are two important things to know about these messages: first and foremost, don’t click on the link that follows the message. It’s only going to spread the spam to everyone who follows the Tweeters who clink on the link. The second thing is that it’s fairly easy to fix a Twitter account when it’s been compromised.

The step-by-step guide from Twitter.com itself says affected Tweeters should change their password to a strong password they haven’t used before; revoke connections to third-party applications they don’t trust or recognize by visiting the Apps tab on the Settings page and hitting the “Revoke access” button; and finally, change the password in any trusted third-party application as soon as possible so users don’t lock themselves out of their Twitter account.

Twitter is acting out against the mass spamming, it reported in its blog earlier this year. “This morning, we filed suit in federal court in San Francisco against five of the most aggressive tool providers and spammers… we’re going straight to the source,” Twitter wrote on April 5, 2012.

“By shutting down tool providers, we will prevent other spammers from having these services at their disposal. Further, we hope the suit acts as a deterrent to other spammers, demonstrating the strength of our commitment to keep them off Twitter.”

While Twitter is suing spam accounts, Tweeters can protect their accounts from future spamming by deleting any unwanted Tweets posted while the account was compromised and scanning their computers for viruses and malware.

But for the most part, they should use common sense. People are more likely to tell their friends in person that someone is spreading rumors about them than in some weird link in a Twitter DM. If something seems too good to be true (like that stranger telling others about a sweepstake for a free iPad), it probably is.

Other signs of spam are: hashtag and trending topic stuffing, since it’s an easy way to reach a lot of people; untrusted and shortened links, like goo.gl, that hide malicious links; bot accounts created by spammers which are only a few days old or have a lot of random numbers in the username; and out-of-character Tweets or messages from trusted accounts.