Battle of the sexes 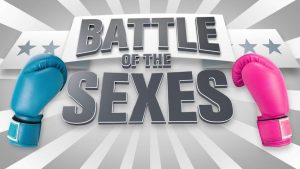 Never has a question gone so long without the general consensus having an answer…who should pay when two individuals go on a date? The question that has caused thousands of arguments throughout history may finally be answered.

Everyone has a different opinion on this taboo subject. These are ours…

Patrick- This is such a difficult question to answer because it really depends on the situation. There are the typical stereotypes that often indicate the man should pay, regardless of the situation. However, I believe stereotypes, such as the one previously mentioned, have no backing to suggest that it should always be an unwritten rule.

Think about it, if the man and woman are both committed to the relationship, and have been steady dating for awhile, why should the man always pay? There is no rule that suggests men should always draw the short straw when it comes to paying.

Personally, every time I go out with a significant other, we like to alternate who pays every time. That way, we split everything even and no arguments erupt or potential awkward conversations. Now on the other hand, if a couple is going out for the first time, I do believe the man should reach for the check.  In this scenario, the man nine times out of ten would have asked the woman to go out. Since he is essentially offering a date, he should pay the bill as an act of not only chivalry, but an act of thanks for the woman agreeing to come.

Kiara- When the bill comes on a date there is usually that awkward “I’ll pay” talk, but why go through this stage every time? There are many alternatives to this dilemma, such as paying every other time, whoever asks for the date pays, or splitting the check. I don’t believe these are the best options, but it is what ever you want.

To me the best thing any couple could do is pay for their own items, and if they share anything split it. Then you do not have the hassle of worrying “what if what I got was too expensive?” or “do I have enough to pay for the both of us?”. Paying for your own meal is probably the best choice because you can get whatever you want without becoming concerned on several possible issues. This also gives the couple some “space” to go to a variety of restaurants which then, they could enjoy whatever they like, without opposing or imposing their pricey cost of food.

In short, the “who should pay” question simply depends on the status of the couple, and what they’re willing to do.