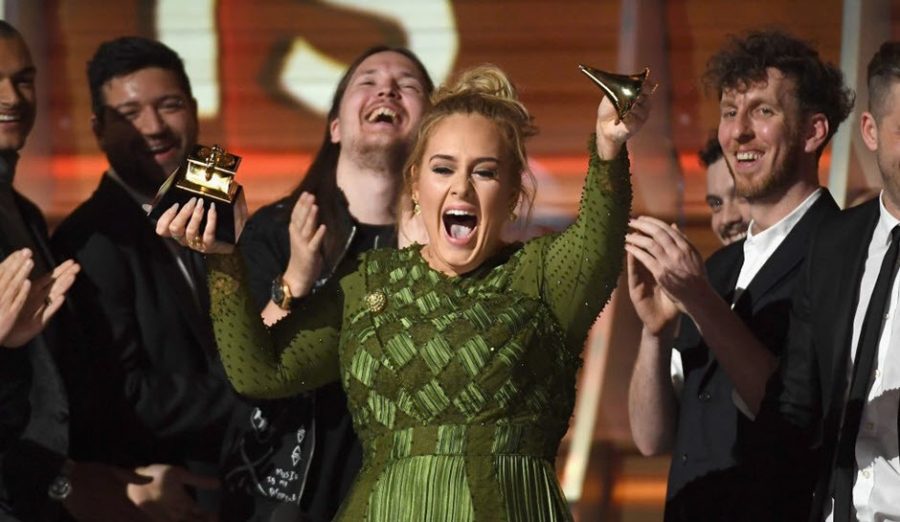 The 59th Annual Grammy Awards were held on Sunday, February 12 at the Staples Center in Los Angeles.

Highlights from the awards ceremony included Adele taking Album of the Year for “25,” as well as Record and Song of the Year for “Hello.” Chance the Rapper had a successful night, taking home two awards for Best New Artist and Best Rap Performance.

Adele was the big winner of the night, not only opening the show, but also winning five Grammy awards. Adele made history for her album “21,” winning six Grammy awards.

Controversy surrounded Adele’s nominations against Beyonce’s nominations for “Lemonade.” The opposing nominations rose questions about the possibility of bias in the award shop between the white and black female artists. Adele addressed the controversy immediately with her acceptance speech.

Adele began her speech by talking about her pregnancy, but quickly said that she could not accept the award because of Beyonce’s “Lemonade.”

“My artist of my life is Beyoncé. And this album to me, the ‘Lemonade’ album, is just so monumental,” Adele said in her speech, “And so well thought out, and so beautiful and soul-baring and we all got to see another side to you that you don’t always let us see. And we appreciate that. And all us artists here adore you. You are our light.”

After winning another award over Beyonce, Adele broke her Grammy award into two pieces, one part for her and the other for Beyonce.

Despite losing to Adele in the Record of the Year, Album of the Year, Song of the Year, and Best Pop Solo Performance categories, Beyonce still had an incredible night.

Beyonce’s performance stole the show, following the internet “hype” of announcing her pregnancy with twins. Beyonce combined the visual aspects of her 2016 album “Lemonade” with a mix of holographic lights and lots of flowers. The performance was centered around the theme of motherhood that is portrayed in the first half of the film and album “Lemonade.”

Beyonce referenced motherhood again in her powerful acceptance speech for Best Urban Contemporary Album, in which she spoke about the influences of young children.

“It’s important to me to show images to my children that reflect their beauty, so they can grow up in a world where they look in the mirror, first through their own families,” Beyonce said, “and see themselves, and have no doubt that they’re beautiful, intelligent and capable.”

Both Beyonce and Adele’s accomplishments in 2016 have set high standards for new music in 2017, promising amazing new work from artists in all music genres.