Small video game company finally makes a name for itself 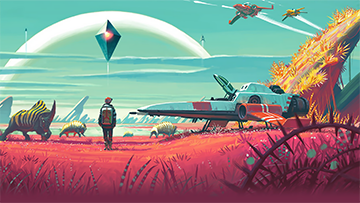 The little known Indie-game company Hello Games is on the rise to stardom as the release date of June 21, 2016 for their latest video game, No Man’s Sky, comes closer and closer.

Prior to the annoucement of No Man’s Sky, Hello Games was a relatively small company. They had made a series of games called Joe Danger which did well on paper, but their other games were not very popular. Since No Man’s Sky was released the game company has become wildly popular with spots in the huge gaming convention, E3 along with multiple videos and interviews by IGN First, considered the New York Times of the gaming community.

The game is based on exploring space, discovering planets, animals, and alien races but is also much more than just that. A closer look at the game shows seamless graphics and lush, beautiful green planets (at least in the beginning of the game) along with jaw-dropping attention to detail to even the slightest things like the way the camera moves as the characters walk.

The place most gaming companies go wrong with open world sandbox games is that they put so much into making the world around the player, and they forget to add some outside interaction to it which leaves the player feeling alone, and in some cases, maybe even freaked out when playing the game. This is definitely a place where No Man’s Sky breaks the norm and delivers what the community wants, a perfect balance of solo exploration mixed with interaction with alien races through bartering, buying, and selling, trading information, or maybe even committing galactic crimes.

What many think is No Man’s Sky’s biggest claim to fame is the fact that the game is infinite. The game is literally infinite and mathematically impossible to complete. Instead of being made up of pre-designed planets, the team at Hello Games wrote code to automatically generate new and different planets indefinitely.

Developer from Hello Games, Sean Murray says, “People will stop playing long before even .1 percent of everything has been discovered,” Murray reflected. “That’s just how games are. I would be foolish to think anything else. It’s a sad thought though. When we fly through the galactic map, we see all the stars, each of which will have planets around them, and life, and ecology—and the vast, vast, vast majority will never be visited. At some point the servers will be shut down. It will all be turned off, and it will be us who pull the plug.”

If that doesn’t put things into perspective, Murray also said in an interview that if every human on the planet were granted immortality, and all played the game nonstop, our sun would run out of energy and explode before every planet was discovered.