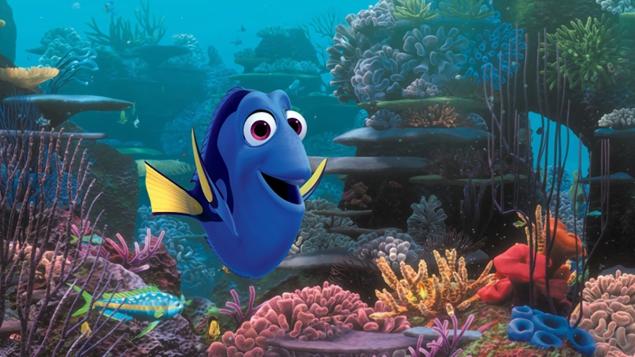 The movie’s character lineup includes a variety of new characters in addition to the originals. Dory’s parents Charlie and Jenny, to be voiced by Eugene Levy and Diane Keaton, will make an appearance in the film.  “They celebrate and protect her, striving to arm her with the skills she’ll need to navigate the world with a faulty memory.  Jenny may appear cheerful and a little flighty — but she’s a protective mother and a smart role model. Charlie likes to joke around, but nothing is more important to him than teaching his memory-challenged daughter how to survive,” Pixar studios teased.

Throughout the movie, Dory meets new characters like Destiny, a whale shark voiced by Kaitlin Olsen, who turns out to be Dory’s childhood friend.  Hank, voiced by Ed O’Neill, is a seven-tentacled octopus who dreams of moving to a Cleveland facility where he can enjoy “a peaceful life of solitude.”  Fellow Modern Family cast member Ty Burrell voices beluga whale Bailey, and the Pixar cast press release read, “Bailey’s flair for the dramatic never ceases to push his neighbor’s buttons: whale shark Destiny can’t seem to get through to him, no matter how hard she tries.”

Fluke and Rudder, two sea lions that much prefer sunbathing over socializing, are voiced by Idris Elba and Dominic West, while comedians Bill Hader and Kate McKinnon make a brief cameo as a fish couple.

Andrew Stanton, the director of both Finding Nemo and Finding Dory, stated that the newest film is meant to be “a whole new chapter” in the aquatic saga.  “We’re introducing new characters—each with his or her own unique voice.  Everyone has something special to offer, which makes it fun and elevates the whole story.  Finding Nemo was a great calling card when it came to casting this movie. I don’t take that for granted,” he told ABC News in a statement.

Pixar President Jim Morris gave even more hints as to the movie’s plot, stating recently at the Comic-Con Experience in Brazil, “The movie will be mostly set at the California Marine Biology Institute, a huge complex of sea life rehabilitation and aquarium, where Dory was born and raised.”