“Back to the Future Day” elicits world-wide nostalgia 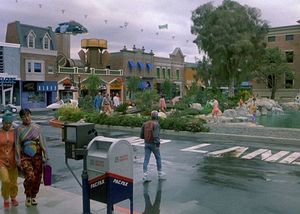 Fans of the “Back to the Future” movie series celebrated a remarkable day for the hit film franchise on October 21st, 2015. The date itself acts as an important aspect to the plotline of the series’ second film and many celebrated its passing.

When “Back to the Future Part II” was released in 1989 as a sequel to the successful “Back to the Future” movie of 1985, it began with the saga’s heroes time-traveling from 1985 to the year 2015. Marty McFly, the film’s protagonist (portrayed by Michael J. Fox) travels to 2015 with Dr. Emmet Brown (Christopher Lloyd) to alter his family’s future for the better. Once in 2015, Marty witnesses a humorously unrealistic future that is greatly juxtaposed against societal characteristics in 1985 and even 1955, where some of the film also takes place.

The imagined 2015 that the adventure film attempted to portray is comically incorrect regarding its realism and accuracy. But the movie’s humorous take on what people in 1985 thought 2015 would be like was enough to win over millions of fans over the years. And with the film’s famous date having finally arrived, people all over the world have contrasted the prediction of life in 2015 with the actual advancements American society has made over the past 26 years.

For example, flying cars, hover-boards, and self-tying sneakers were all featured in the movie’s 2015 landscape. While flying cars are certainly not feasible in this day and age, Lexus has teamed up with some of the world’s smartest technological experts to begin working on a fully functioning hover-board prototype, according to the car company’s official website. And footwear giants Nike have even released news that a new shoe, modeled after the one featured in “Back to the Future Part II”, will be released next year. The limited edition Nike “MAG” shoe will have self-tying laces and is set to have a limited release in early 2016, Nike.com stated.

But merchandising is not the only medium that this “Back to the Future” craze has affected. When “Doc” and Marty travel to 2015, it is revealed to them that the Chicago Cubs had won the World Series in the fictional universe. In reality, the Cubs were still vying for the World Series on the 21st, and were in the midst of their first playoff berth since 2008. This amusingly shocked many fans of the franchise, and of the Chicago team, as the normally very unlucky Cubs were not predicted to have a shot at the title this year. The Cubs would fall out of contention that very same day however, losing to the New York Mets in  a game that would perhaps, in some fans’ eyes, alter the film series’  famed “space-time continuum”.

Now that the entire “Back to the Future” series has taken place in the past, fans can look “back” on the series with a new-found peace-of-mind.