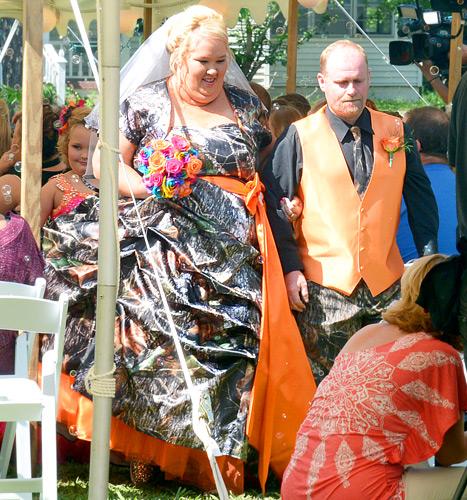 According to People Magazine, June and Mike Thompson, also known as “Sugar Bear,” held a backyard ceremony on Sunday, May 5th. However, neither one of them will confirm whether or not they have legally been married.

A People Magazine reporter told ABC News that “Mama June isn’t saying whether or not they’re married, but they did renew their vows. She’s still in love with Sugar Bear and she wanted to show their love to her girls.” In addition, a TLC representative told E! News thatcurious Honey Boo Boo fans would have to wait to find out what really occurred. “You’ll have to watch the new season,” was their only comment.

No matter what the ceremony may have been for, it was certainly a family affair. Honey Boo Boo and her sisters Pumpkin, Chickadee, and Chubs all were present. Honey Boo Boo was even spotted carrying roses down the aisle.

June told People Magazine that “The day was very special mostly because my girls were able to take part in it. I felt like it was important for them to see this moment and celebrate my love for Sugar Bear.”

There were many unique aspects to the ceremony, such as a camouflage wedding dress, neon roses, a homemade cake, and a barbeque. “Blinged-out” sneakers and french-tip nails were also spotted on the girls. A People Magazine reporter stated that “They ate barbeque and it was a finger-licking good time.”

“My sister baked the cake, and we spent most of the money on the barbeque. We stayed true to our roots and made the focus on the family and my commitment to Sugar Bear. You definitely can plan an event on a budget!” June said.

The family’s hometown of McIntyre, Georgia was buzzing with curiosity about the event. A friend of June stated that “I’m so glad that they’re finally doing it. June just is scared of the whole thing. But I guess he finally convinced her.”

June left one final piece of advice for anyone searching for love. “Never settle for a man who doesn’t treat you right. If a guy doesn’t love everything about you, move on! There are plenty of other fish in the sea. I give this advice to my daughters because I always want them to be themselves and surround themselves with people who love them for them.”