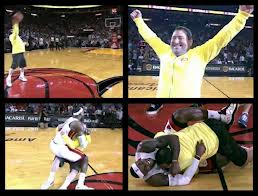 LeBron James tackles the winner of $75,000 after completing the midcourt shot.

Perhaps the tackle from LeBron James that followed the amazing, yet awkward, hook shot sent from the arms of the small town McHenry, Illinois native Michael Drysch was worth more than the $75,000 he was awarded for making the seemingly impossible basket.

Michael Drysch, a humble computer technician, had his life sent into a whirlwind of excitement and utter shock this past Friday after the realization that he was now $75,000 richer finally sank in.

Drysch was randomly selected to attempt the half court shot by the LeBron James Family Foundation earlier this year. After finding out he was selected, Drysch started to “step-up” his game and practice for this once-in-a-lifetime opportunity. Drysch said he made about one percent of his practice shots in the days leading  up to his big moment. Nevertheless, his hardwork paid off when the foundation flew him out to Miami to attempt the challenging basket during the Heat vs. Pistons game on Friday, January 25, 2013.

James stood from the sidelines watching anxiously the entire time Drysch was on the court. “When he wound up I was like, ‘Oh no, there’s no way,'” James said. “When it dropped, that was awesome. I would have probably air-balled that one in that situation.”

Having the LeBron James admit that he probably would have missed that shot? Seems more meaningful than the $75,000.

The LeBron James Family Foundation, started right before James was drafted, was created by James and his mom. James describes, “Mom and I wanted to create a foundation that, regardless of where I was playing, would be dedicated to giving back to the community by enriching the support system that helped us along our journey. And today, we’re still all in!”

When asked how he felt about the 250 pounds of NBA that initiated the bear hug, Drysch replied, “It’s a great way to meet somebody like that,” Drysch said. “I had no idea he  was coming over to me like that.”