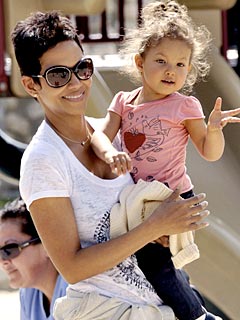 By the looks of it, Halle Berry is going to have to say “Au revoir” to her plans of moving to France.

Sources have indicated that Berry’s request to move to France (and decision to take 4-year-old daughter Nahla, too) have been denied by a recent judge during the court room battle against ex-boyfriend Gabriel Aubry.

Berry’s rep refused to questioning after the court case was dismissed.

Berry’s request started back in February when she alleged told a Los Angeles family court judge that she wished to move to France due to a personal safety concern for her and her child. This concern was mainly due to an incident that had occurred the previous months involving two men who had continually stalked her. One of the men, Richard Franco, was convicted of stalking Berry, however he was released from prison earlier this year. The second man, Richard Hoskins aka the man who threatened to slit her throat, managed to escape from a psychiatric hospital last February. (Hoskins has also been in trouble with the law for threatening to slit Madonna’s throat, too.)

While Berry only had good intentions with her wish to move out of the country, former boyfriend Aubry argued to the court that the move to France was designed primarily to stop him from seeing and spending time with Nahla.