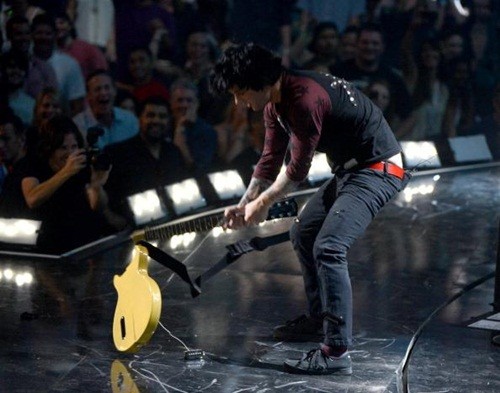 Green Day announced lead singer, Billie Joe Armstrong, entered rehab Sunday, September 22,and posted on its website that Armstrong, 40, is seeking treatment for substance abuse, though the nature of his problems were not  specified.

The announcement followed an explosive meltdown from the rocker at the iHeartRadio Festival in Las Vegas.

Armstrong cut a song short when he noticed a sign indicating Green Day had one minute left for their set, shorter than he had expected, and began to rant. “One minute left… You’ve got to be… kidding me. I’m not… Justin Bieber,” he said, pointing out that Green Day had first been signed in 1988. “This is a… joke.”

Armstrong then put down his microphone and slammed his guitar on the stage until it broke. He threw the remaining pieces to the crowd and said, “We’ll be back,” before walking offstage.

“We would like everyone to know that our set was not cut short by Clear Channel [Broadcasting, the owner of iHeartRadio] and to apologize to those we offended at the iHeartRadio Festival in Las Vegas,” the band said in a statement on its website two days after the show.

It is unknown how this will affect Green Day’s upcoming tour, slotted to begin on November 26, or NBC’s “The Voice”, which had expected to feature Armstrong as a mentor. The band did announce its future promotional shows would have to be postponed.

Earlier this month, Armstrong had been rushed to a hospital in Italy “due to illness”, bassist Mike Dirnt said.

The music scene is divided on what caused Armstrong’s meltdown; some people believe he really has relapsed, while others say he was justified because they believe his set was cut short to make more time for Usher. Still more think his breakdown was a publicity stunt to bring attention to Green Day’s most recent album, ¡Uno!, which was released September 24.

“I think the most special part for me is going to be, is we’re going to blow them off the stage,” Armstrong had said ahead of time. “That’s going to be the funnest [sic] part. Because maybe they’re not going to ‘heart’ radio as much as they did before, until Green Day plays it.”

Whether or not the meltdown was premeditated, Green Day certainly did put on a memorable show.