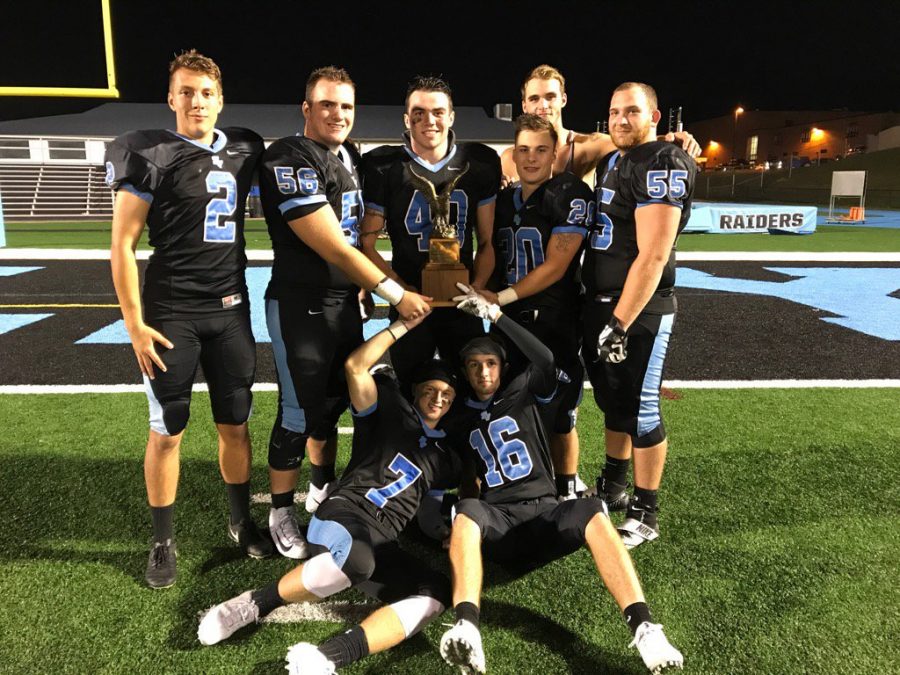 Members of the Raiders celebrate after claiming the Eagle Traveling Trophy

Following the overall success the Seneca Valley Raiders saw in 2016 with a trip to the WPIAL Finals, many suspected this year to be a massive re-building year.

After losing their head coach, Dave Vestal after last year’s season, the Raiders proceeded to hire their former offensive coordinator and Senior High School’s Dean of Students, Ronald Butschle. The switch seemed almost a natural one, as Butschle had previously been SV’s head football coach a few years back.

When asked about the coaching switch, Senior tight end Malik Talaat said, “It was a shame that Vestal left after leading us to the WPIAL Championship last season, but there wasn’t that much turnover with Butschle. He was our offensive coordinator during Vestal’s tenure, so we essentially kept the same offense as previous years.”

Along with the coaching changes, the team also had to look to many fresh and inexperienced players all over the field to continue the success last year’s seniors saw. Although there were glimpses of success and improvement across the team, they are still sitting with a 1-6 record up to this point. The Raiders are out of the WPIAL playoffs but hope to finish their season strong with wins at Shaler and Altoona in their final two games.

One major aspect the team has struggled with all season has been getting starting Sophomore quarterback, Gabe Lawson, and his wide receivers on the same page. This issue has been a major hindrance to the progression of the team in many key game scenarios.  One such example of this came towards the end of the game against Bethel Park when a pick six halted a strong drive by the Raiders that would have evidently tied up the game if it resulted in a touchdown.

Senior wide receiver, Jake Bunofsky, commented on the passing issues, saying, “It’s for sure been a struggle. Chemistry is a big part of football and over the course of the year we tried to build that chemistry as much as possible. Unfortunately, it didn’t click like we would have liked it to. Everyone has their own strengths and we just couldn’t put it all together…we for sure had the talent to do so.”

He continued with, “We’re out of the playoffs but we still have two games to try to make the best of the situation that we’re in.”

Although all of these issues have been apparent throughout the year, the team has still seen many improvements and a good deal of success. The team’s only win came in a 35-0 route against Butler, allowing the Raiders to keep the Butler Eagle Traveling Trophy for the eleventh year in a row. Along with that, the team was able to hang in many games, including a close, heartbreaking 21-20 loss on the road against the former WPIAL champions, Central Catholic.

The relative inexperience the team faced can be represented with the sheer lack of seniors on the field. This season the Raiders only had four seniors starting on offense. These four were lineman Nolan Nagy and Even Schillero, running back Noah Mancuso, and wide reciever Jake Bunofsky. The rest of the team, senior or not, were all extremely inexperienced and had little if any high-school playing time.

However, if this year was truly meant to be a rebuilding year, the team will see the return of many starters for next season. They will have a quarterback with a year under his belt, a good group of receivers who will most likely be led by current junior Luke Smith, and successful junior linebackers Saige Ley and Jake Stebbins. Along with these players, the Raiders will have many other sophomores and juniors with a good deal of experience playing next season.

Talaat and Bunofsky were both asked if they could give a good season recap up to this point. Talaat gave this, “We have consistently struggled with, well consistency. We have shown flashes of how good we can be, but that hasn’t occurred enough for us to earn victories.”

As for Bunofsky, he stated, “As a team I think we’ve really been able to  put together some good spurts, we just couldn’t put it together for a full four quarters. We made a lot of progress from our first game at Peters Township and I think we improved a lot, just not enough unfortunately.”