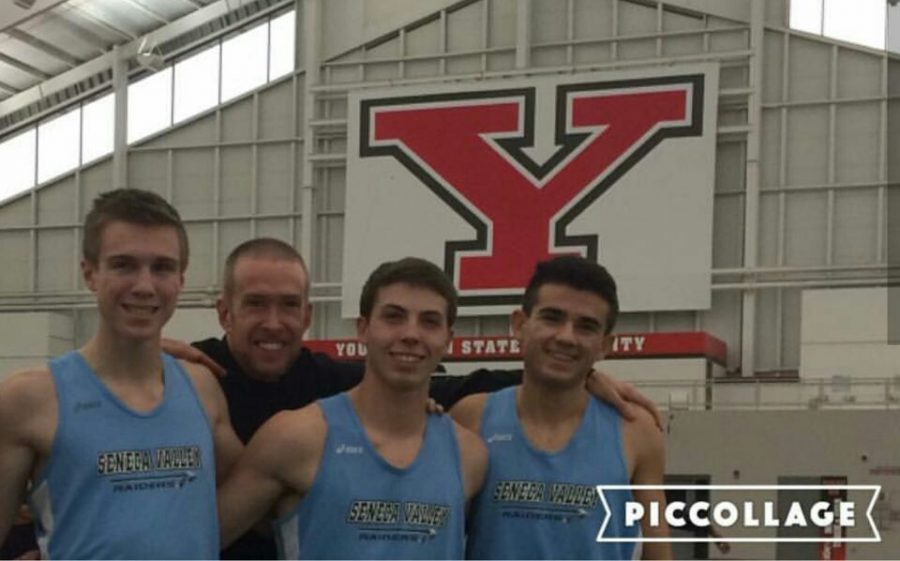 After a successful season for the young 4×800 team, a tenth place finish at the Pennsylvania state championship was a nice way to begin training for the outdoor season.

The race was held at State College, PA and consisted of senior Parker Laughlin, juniors Luke Bellack and Alex Dixon, and sophomore Sam Owori. Sophomore Seth Ketler was the team’s alternate. They raced against seventeen other teams from across PA.

“It took a lot to get there. In our area there isn’t much competition like there is on the east side of the state,” said Dixon. “So when we run in our division, we always have to race against the clock rather than any of the other teams because they can’t really push us harder.”

Dixon went on to tell the Seneca Scout that they had to race against the top four teams in the nation, which really showed them the next level of competition.

The team did however break Seneca Valley’s indoor 4×800 school record, which was previously 8:07 and now is 8:04.95 seconds. Despite this, they still believe they should have placed higher.

Bellack told the Scout, “We definitely could have done better since two of our best runners didn’t have their best performance. Everyone ran the best race they could, (we) just didn’t put out the best times that we’re capable of.”

“We could have ran better. We were hoping to medal (top 8),” said Dixon.

The team is led by Coach Bercury and Coach Dosch who have helped train and prepare them throughout the indoor season and for the state meet.

When asked about his coaches, Bellack said, “They’ve definitely helped a lot with our training and letting us know what we’re capable of achieving.”

With the outdoor season approaching, the team is looking to do big things for the school. Many on Seneca’s track team and the coaches believe the team will be able to take the 4×800 outdoor record too. The team is all focused on winning the WPIAL championship this year and performing well at states.

Dixon told the Scout, “We feel strong enough in the 4×8 to win WPIALS, and hopefully do well in states. We are a young team too, four of us will be back next year and we will only get stronger.”

Returning to the team as Seniors next year, Luke Bellack and Alex Dixon will lead teammates Owori and Ketler, all looking to build off of this year’s season.