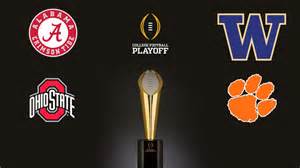 With Alabama and Washington both dominating their SEC and ACC championship games against Florida and Colorado, and Clemson holding off Virginia Tech in a close match-up for the ACC title, all three teams secured their playoff hopes with conference championship wins. However, Ohio State did not play in their Big Ten championship game due to a loss earlier in the season to Penn State. The (at the time) number five team in the country, Michigan, beat Penn State earlier in the season. However, they had two conference losses (to Iowa and Ohio State) opposed to Penn State’s one, so they also were not in the Big Ten championship. The Championship match-up turned out to be Penn State (ranked number eight at the time) versus Wisconsin(ranked sixth at the time).

The thrilling match-up would be a close one, but in the end Penn State won 38-31 with a second-half comeback. There was much speculation that since Penn State had beaten Ohio State and won their conference championship, they should be in the playoffs. However, when the selections came out last weekend, Penn State was not involved. Instead, Ohio State remained at second and PSU would be on the outside looking in at fifth.

The number one Alabama Crimson Tide will be facing the number four Washington Huskies on December 31 in the Chick-Fil-A Peach bowl. That same day, number two Ohio State will play against the number three Clemson Tigers in the PlayStation Fiesta Bowl.

Penn State would be berthed a spot in the Rose Bowl against USC. The match-up is looking to be very exciting.

When asked about the CFP committee’s selection, Penn State’s head coach James Franklin told ESPN, “You can make arguments for and against so many teams.” He went on to speak of how his team is very appreciative to be in such a historic bowl.

Ohio State became the first team in the three year College Football Playoff history to make the playoffs without winning their conference title. Ohio State, along with Clemson, will be making its second straight playoff appearance and Alabama will be making its third.

In the Peach Bowl, Alabama is the favorite to win due to them being only one of two teams to go undefeated this season (the other being Western Michigan) and being last year’s national champion. However, the Huskies could prove to be a tougher match-up for Alabama than some may assume. Washington’s powerful offense is led by quarterback Jake Browning, wide receiver’s John Ross and Dante Pettis who have both combined for thirty-one touchdowns this season. They also have running backs Myles Gaskin and Lavon Coleman, who have combined for over 2,000 rushing yards. As for Alabama, much of their success can be credited to their defense, specifically defensive lineman Jonathan Allen, who is arguably one of the best defensive players in the NCAA.

Ohio State and Clemson is expected to be an exciting match-up due to both teams being very evenly matched. Two years ago, Ohio State won the first ever CFP championship, beating Alabama. Last year Clemson just fell short in the Championship match, losing to Alabama. Clemson’s high-powered offense led by Heisman Candidate Deshaun Watson will face OSU’s dominating defense. The Buckeyes have not let up more than 27 points a game this season. However, Watson has 3,914 passing yards and 43 total touchdowns this season, so he’s more than capable of lighting up the scoreboard.

With the bowl season coming up, there will be plenty of exciting football left to watch. However, the playoff bowls this year are sure to be thrilling to viewers as all four teams fight their way to a national title with a victory in the final BCS National Championship Game.