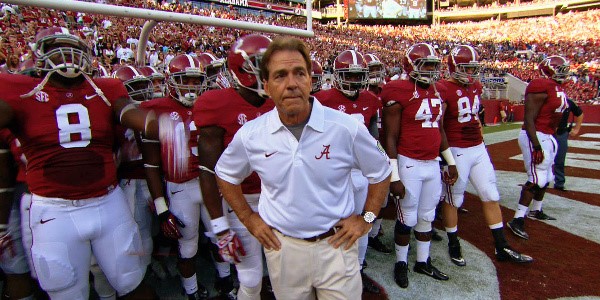 Those are the only two words that need to be said for almost any American to know who the country’s college football blue blood is.

The Alabama Crimson Tide have created a college football dynasty that will be very challenging to match. Nick Saban took over as the head coach of what has become a monumental college program in 2007, and he deserves nearly all of the credit for the success.

Sports Reference notes that Saban has a myriad of accomplishments since moving to Tuscaloosa, as he entered 2016 with a record of 105-18.

The success of Alabama hasn’t skipped a beat since the transition to the College Football Playoff (CFP) format was made in 2014.

In 2014-2015, the Crimson Tide claimed the number one seed in the inaugural College Football Playoff, but they were halted by the eventual national champion Ohio State Buckeyes at the Sugar Bowl, as ESPN indicates.

In 2015-2016, a regular season hiccup loss at home against the conference foe Mississippi Rebels forced Alabama to slip to the number 2 slot in the Playoff’s second edition.

It was at the Cotton Bowl where they trounced the Michigan State Spartans and at the College Football Playoff National Championship Game where the Tide shocked the number one Clemson Tigers to capture their fourth national championship under Saban.

Two games remain for Alabama, and they will both be played within the confines of Tuscaloosa’s Bryant-Denny Stadium. ‘Bama will square off with the FCS powerhouse Chattanooga Mocs and the despised rival Auburn Tigers in the Iron Bowl.

After that, the Crimson Tide will represent the west division of the SEC at the conference championship game in Atlanta, Georgia. Presumably, that game will only boost Alabama’s resume and solidify their number one spot.

Whether it be Ohio State, Michigan, Clemson, Louisville, Washington, Wisconsin or Penn State, no team will not be a significant challenge to the Crimson Tide.

The Tide will walk out of this season with what their fan base and community has become accustomed to–a National Championship.