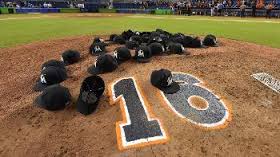 Tragic news for baseball fans everywhere as Miami Marlins ace,  24 year-old Jose Fernandez, was killed in a boating accident off the coast of Miami beach.

Fernandez was coming off of a shutout performance on Saturday night, and decided to go on his boat, as he has done many times before, along with his two friends after the game.

The boat was found on Sunday morning tipped over on a large rock off of the coast of Miami beach, with all three bodies in the vicinity. Investigators reported that speeding was a factor in the eventual crash.

Fernandez was born in Santa Clara, Cuba, and risked his life coming to America after he was defected four times in Cuba under the charge of “being a traitor to Fidel Castro.” After defecting, Fernandez and his mother joined his father in Tampa. Fernandez began his baseball career at Braulio Alonso High School after making the team. Four short years later, he was a first round pick in the MLB.

Fernandez was not only a remarkable young talent, he was an icon in the Cuban community through his volunteer work, and an inspiration to several as he was living the American dream.

The Miami Marlins decided to cancel their Sunday night game against the Atlanta Braves in order for the players to have time to mourn the loss of one of the games best, young talents.

In response to Fernandez’s sudden loss, the Marlins players have made heartfelt comments on his behalf. The marlins all-star outfielder, Giancarlo Stanton, had this to say about Fernandez, “I lost my brother today and can’t quite comprehend it. The shock is overwhelming. What he meant to me, our team, the city of Miami, Cuba, & everyone else in the world that his enthusiasm/heart has touched can never be replaced. I can’t fathom what his family is going through because we, as his extended family are a wreck.”

In Monday nights game against the New York Mets, the entire Marlins staff wore number 16 and had a pregame ceremony highlighting Fernandez’s impact on the entire world. The Miami Marlins organization stated that they will even retire number 16 to remember the legacy Fernandez left behind.

The Mets manager, Terry Collins, added his thoughts on Fernandez’s debut against his team three years ago, “When the first pitch left his hand, the first thought is, oh, wow, this is something special. This was not only one of the greatest pitchers in the modern game, but one of the finest young men you’d ever meet, who played the game with passion and fun and enjoyed being out there.”

After the emotional ceremony during the Monday night game, both Marlins, as well as Mets players, could not hold back tears as they reminisced. During the very first at-bat of the game, Dee Gordon hit a homerun in what seemed like a storybook fashion. The homerun was the very first of the season for Gordon, and he started to tear up as he rounded home into the grieving arms of his teammates.

Fernandez announced a week ago that him and his girlfriend were expecting a child. Fernandez stated, “I’m so glad you came into my life. I’m ready for where this journey is gonna take us together.” Fernandez’s girlfriend has yet to comment on his sudden loss.

Fernandez spent four seasons in Miami, posting an impressive 38-17 record, winning the NL’s Rookie of the Year award in 2013. Fernandez was a two-time All-Star, and was on pace to become a hall of famer.